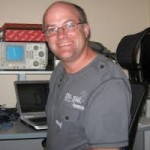 How about that: It's the first episode of Linux in the Ham Shack for 2015! We hope everyone is having a great new year so far. In this episode, we talk with David Rowe, VK5DGR, of Adelaide, South Australia. David is an audio engineer, Ph.D. scholar, inventor of Codec2 and co-author of FreeDV, among his many accolades. We talk to David about his projects, Linux, amateur radio, life in Australia, LinuxConf AU, the new SM1000 FreeDV device, the amount of energy it takes to make a Krispy Kreme donut, home built electric cars, and much more. Until next time...

After my grandfather passed away I spent a lot of time recalling the good times I had spent scrounging around his CB shack and hanging out with Pop “down the shed”. If you’ve spent time around old motorbikes, retired lawn mower engines, vacuum tube electronics and inches of dust you know what the shed smelt like and probably have a pretty good idea what it looked like as well.  I used to be able to send Mum into fits by embedding a combination of oil, grease, dust and grinding compound into the knees and sleeves of my good clothes after spending the day “over south” (South Geelong)

Even now I can still walk into any old auto mechanics and the smell brings back dozens of memories as clear as day … but one memory in particular had been bugging me for a while now. On several occasions I had used a magnificent rack mounted shortwave receiver that had been hooked to a long-wire antenna between the shed and the house. It had several plug in coils housed in bright metal boxes, one for each band as well as a unique tuning dial that had windows around the circumference with numbers that updated as the dial was turned.

For the longest time I was thinking what you are probably thinking now, I had been using a National HRO receiver right? Well, you’d be wrong … just as I had been for years! When I eventually asked my uncle about the receiver (I waited a long time as I feared it had been thrown out & honestly didn’t want to know if it had) he said, “The AR7?” … “Yes, its here in the garage covered in dust”. He went on to say that I could have the receiver if I could figure out some way to ship it … not a slight problem given the receiver, power supply and speaker are over 120 lbs!

The AR7 was produced during WW2 by Kingsley Radio of Melbourne for the R.A.A.F. These receivers were used in ground stations for long range communication over fixed circuits as well as for receiving signals from aircraft.

The AR7 was based largely on the National (USA) HRO model, a fact that did not go unnoticed by National. This was the subject of litigation during the war years. Over 3000 of these receivers were produced and for their time, produced excellent performance.

These sets were very popular with radio amateurs after the war and unfortunately subject to many modifications. The Wireless Institute of Australia station, VK2WI at Dural New South Wales was equipped with modifed AR7’s for many years. I seem to remember that very local operators could block the receivers completely, resulting in hurried phone calls!

An unmodified AR7 is a rare beast. The Department of Civil Aviation used these sets for many years in a highly modified form, requiring a new front panel. Refinements included squelch and crystal locked coil boxes.

The AR7 is a communications receiver covering LF and HF bands. It was made in Australia during 1940 and bears an extremely close resemblance to the National HRO receiver. The receiver has a tuning range from 138 kcs to 25 mcs, with a gap of 45 kcs either side of the 455 kcs IF amplifier. The internal design is a single conversion superheterodyne receiver with 2 RF stages, 2 IF stages, a BFO and an “S” meter amplifier. The sensitivity is quoted as 1 microvolt. The front panel is stainless steel and  it is a very distinctive looking receiver.

It is a good performer, sensitive, has a nice feel, is easy to tune, but hard to find the correct frequency, by reading the frequency from the dial number and coil box graph. It really needs a crystal calibrator.  I use it for the weekly W.I.A. (Wireless Institute of Australia) broadcast, so it gets turned on once a week, and is so stable, than I don’t have to retune. It is very clear for AM but a bit fiddly for SSB. 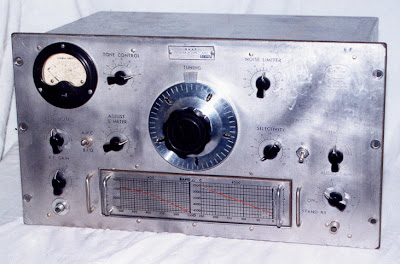 It has two 6U7G RF stages, a 6K8G mixer, two 6U7G  IF stages at 455 kcs,  a 6G8G detector/AVC/audio preamplifier, and a 6V6G audio output amplifier. It has a 6C8G twin triode as a BFO and “S” meter amplifier. It also has a crystal filter. The IF alignment should be done very carefully, as any misalignment will reduce the effectiveness of the filter. It is best done with a sweep generator. The 6 volt valve heaters are connected in series, for 12 volt operation.

The external power supply and speaker, are usually mounted in a short 19″ rack, the AR7 at the bottom, the speaker in the middle, and the power supply at the top. The complete unit weighs about 118 pounds. The power supply was switchable between 12v and 240v.

The receiver was used as a ground monitoring receiver for aircraft. It was extremely stable. The model shown has an R.A.A.F. nameplate, and serial number 1786. The manual I have is a D.C.A. (Department of Civil Aviation) version and is a 1947 issue.