The 1Watter is a kit from kits and parts dot com

The Universal 1Watter (also called the 1H2O) is a full featured little superhet radio transceiver that you can build for about $50.  It doesn't come with an enclosure, a tuning pot, speed pot or an on/off switch so that will cost extra unless you already have some in the junk bin.
Some of the features include;

The kit is delivered in a box and inside are a couple of brown paper bags stapled together.  Inside one of the bags are a couple of plastic bags with the components.  The other bag contained the header kit.  The ferrite toroid mix types are separated in different unmarked plastic bags so don't mix them up (the instructions tell you which bag has each mix).  If anything is missing the kit supplier (Diz, W8DIZ) is very responsive.
The kit includes both SMT caps and through hole caps.  I tried to solder one of the SMTs but I didn't have the right kind of tweezers to hold it in position for soldering so I used the through hole caps. 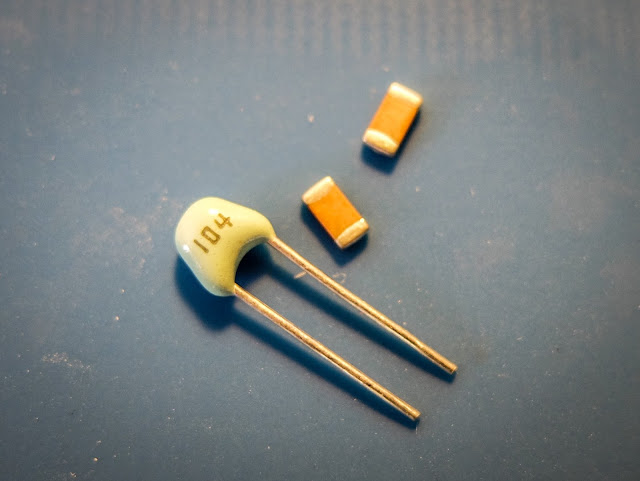 This is the 3rd revision of the Universal 1Watter board and I was the first to build the 40m version.
While the schematic was correct, some of the instructions weren't sorted out properly for the 40m kit.  I related issues as I found them to the designer and he promptly updated the online documentation.
I soldered the components and wound toroids as I had time over a few evenings and the initial voltage tests went well.

When the build was completed I connected the rig to an antenna and heard nothing.
The keying circuit and transmitter worked fine and I verified those functions but the receiver was deaf as a stump.
Thus began a number of days of investigation.  Diz (the creator of the board) guided me through a number of debugging steps.
The first recommendation was to examine and rewind the binocular toroid balun that transformed the impedance from the xtal filters to the input of the U5 oscillator.  He believed that I may had wound it incorrectly.  I desoldered it and rewound it but that did not resolve the issue.
He then guided me through determining if one of the filter crystals or filter capacitors was bad.  I desoldered a few components as a tests but that did not resolve the issue.
There are 3 identical mixer chips on the board.  I swapped them around as there was a suggestion that there were some faulty chips in one of Diz's shipments.
I then took the board to my Elmer Paul Stroud AA4XX.  He had a signal generator, Oscilloscope and RF detector.  He traced the RF and all looked well but we still were unable to obtain any signal through the U5 mixer.  Lastly we tried disconnecting the AGC transistor to see if it was clamping it and that didn't resolve it either.
Diz asked me to return the radio to him so he could take a look.  After a couple weeks he emailed me saying he thought the BFO xtal might have a problem.  But he later discovered that the oscillator in U5 was not starting up.  Apparently the circuit design had a low Q and needed more current to get the oscillator working.  He modified the design, adding a 16k resistor to the bottom of the board on U5 to get the oscillator going.  After that all was well and he shipped the board back to me.

Being the first person to build a particular version of a kit brings its own set of challenges, especially when you're as new to kit building debugging RF problems as I am.  However I'm actually glad the kit didn't work right at the initial build.

The process of debugging the board, was a great learning process.  I studied the schematics and learned, as best I could, the function of each circuit so that I could better understand how to test it.  During the debugging process Diz instructed me that although RF signal generators and scopes are useful you can tell a lot by touching a RF component with an inductive metal object and listening for a buzz or hum from the BFO.

So all-in-all, even though the bug in the board was not due to a error on my part, I'm glad it occurred.  I understand more about superhet radio design than I did before and more than if the kit had worked right off the bat.

After receiving the board back, I hooked up the frequency XCO potentiometer, paddle, command button, audio and output potentiometer and an external speaker.  I then connected a 12v battery and heard the 1H2O keyer chip announce itself at power up in Morse "1 W".

You can change speeds and modify settings via the command button which I have not reviewed yet.  I also plan to add the speed pot so that I can easily change keyer speed without entering the command menu.

For this first on-air excursion I was using it at the default startup 15wpm keyer speed.  You can default the speed higher with a different resistor value.

I have a resistor shrink wrapped and connected in-line to the blue-white wire coiling above the radio connecting to the speed pot terminal.  In essence fixing the speed at 15wpm until I add the speed pot.

I tuned around and found a strong station at the end of a QSO near 7030 kHz.
When he sent the final dit-dit I called and WD4AXJ answered my first call.  He was in TN near Knoxville, and I received a 559.  We chatted for about 10 minutes. Sorry about the blurry video.  I thought I'd focused.
After I recorded this video I found an open frequency and sent out my call.  Very shortly thereafter KD2FSH answered my call and reported me as 599!
Whoo - hoo.  599 for my little 1Watter 40m.
I was transmitting using my 40m attic antenna.  So deed restricted HAMs take note.  You can build a one-watt radio and make contacts using your attic antenna. Haha.
You'll hear in the video there is some weirdness going on with the audio derived AGC.  It is clamping down sometimes and is worse when I don't have the volume turned up very loud.  When I began calling it clamped after every semi-break-in but didn't do it much after that.  I'll have to look into that.
The AGC clamping may be a side effect of the increased gain Diz added to the BFO oscillator.  I'll ask the forum.
Other than the AGC issue I'm super pleased with the little board.  I touched the heat sync a couple of times after transmitting my side of the qso and it was warm but not really hot.  It seems as though as long as you have a reasonable match to the antenna the power transistor should be happy.
My next steps are to get it in an enclosure and get it out to the Excalibur antenna site to hook onto that nice 40m doublet we put up a couple weekends ago.  I plan to use my efficient little BLT tuner for that purpose.  I will do a further review of the feature set on the keyer and record some more qsos for a later review.

The band was fairly busy and the little 1Watter did a fine job with stations on nearby frequencies. You can hear some getting around the passband but it is not bad at all.  I'll do some tests to further define it's selectivity but at first glance it is far better than my old Ten-Tec Century/21.
My calls were answered quickly and I received good signal reports. It didn't sound as though the transmitter was drifting at all during the QSO. That's one advantage of using VCXO in the design.  The disadvantage of using a crystal controlled oscillator for the frequency control is limited tuning range.  The transmitter only has about a 18 kHz tuning range around 7030 kHz and I don't find many of the SKCC folks around that frequency but it is the QRP watering hole for 40m.
It is possible to shift the frequency with some capacitance changes but I think I'll leave it as is for a time and see how many states I can work.

Just imagine.  This little $50 single band kit has good selectivity, a nice built-in keyer with a natural sounding sidetone, and lest we forget... You get a MIGHTY 1 WATT of OUTPUT.  What more could a QRP ham need.

That one-watt of output was sufficient for all the QSOs I attempted tonight.
So lower your power and raise your expectations
72/73
Richard, AA4OO

I am still having the AGC pumping issue and others on the list have reported similar issues but only on receive.  It happens to me when I key unless I turn up the volume very high.  I did get it installed in a case but I still need to wire up a real power connector rather than using alligator clips.

After doing quite a bit of reading I learned that the LM386 op-amp used in the 1watter is rather notorious for audio oscillations.  There are a number of suggested fixes.  I went with a 4.7uf cap connecting Pin 7 on U6 (the LM386) to ground.  That hasn't totally resolved the issue but it's much less pronounced now.


I have it in the case with all the proper plugs now (see below) so I'm happy.  I've been making QSOs every day with it and it continues to amaze me and the stations that work me.  It is stable as a rock with regard to frequency and the large knob with the single turn 10k pot seems to work well for tuning.  I have enough control to vary the frequency slightly without having to turn it too much.  The tuning range is only about 20kHz so just 3 frequency markers are plenty to let me know what frequency I'm near.  The selectivity is just fantastic for such a simple little radio.  Diz has created an inexpensive winner.