Click on this image to see a larger version of this image: 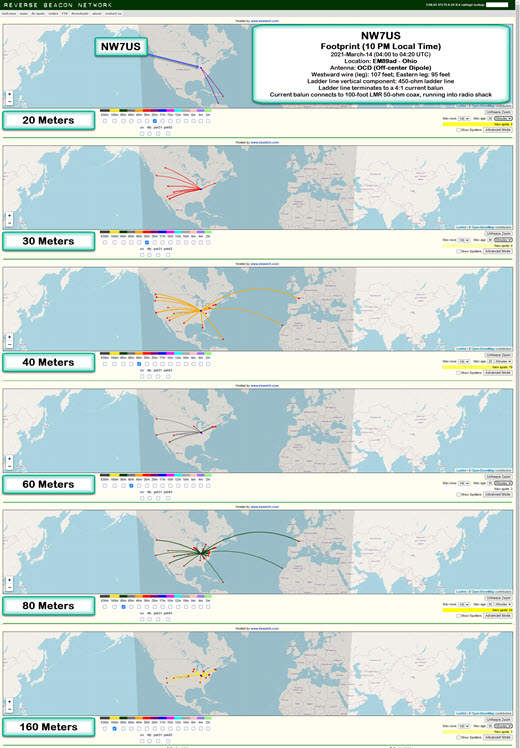 This is an off-center dipole, with the two legs running East-East-South (approximately 125 degrees of North), and West-West-North (about 306 degrees on the compass). The westward wire (leg) is approximately 107 feet in length, while the eastward leg is about 95 feet in length.

These legs (an off-center-fed dipole) is directly connected to about 90 feet of 450-ohm ladder line, which is hanging directly below, vertically, the feed point. The feed point is 50 feet above the ground.

The ladder line terminates (at the 12-feet-above-ground point) to a 4:1 current balun. This current balun then connects to a 100-foot LMR 50-ohm coax, which is running into the radio shack. It is connected via an antenna switch to my Icom IC-7610 transceiver. I am transmitting a 100-watt CW signal using an Icom IC-7610, in the following format:

I’ve been capturing these CW transmission spots, at different times of the day, today. I’ll get data from several days, at regular intervals, and create a overview of how the antenna appears to be working during this month and under these propagation conditions.

Just Get On The Air! (A Makeshift Temporary Dipole Shortwave Antenna)

It might not take as much antenna as you may think would be necessary to make two-way contacts on shortwave radio (as an amateur radio operator putting an HF transceiver on the air). However, often, makeshift antennae are effective enough to be viable–just look at all the contacts many amateur radio operators make with their low-power (QRP) rigs (transceivers) using short, helically-wound, mobile antenna sticks. If they can work magic with such inefficient antenna setups, surely your effort at an antenna would pay off to some degree. Right?

Of course, I want to make a proper dipole out of this example antenna. But, while I wait for the rest of the parts I need to complete this antenna project (pulleys and a ladder, and maybe a potato launcher), I’ve put this makeshift antenna on the air, with it just high enough so that I can enjoy some time on the shortwave bands.

The bottom line: just get something up in the air and start communicating. Improve things over time. You’ll have much fun that way.

My Buddipole Antenna, Configured as a 2 Element Yagi for 6 Meters

The ribbons are to keep me from poking my eyes out on the end of the whips.

Here, I’m trying the antenna out in my driveway before I take it to the beach.

This pavilion is my favorite operating spot at Hagen’s Cove.

It overlooks Dead Man’s Bay, on the Gulf of Mexico in Perry Florida.

I’m going to spend the summer playing around with my Kx3 on 6 meters. The antenna here is a Buddipole, configured as a 2 element Yagi. Its easy to assemble in the field, so I’ll take it to the beach (Hagen’s Cove) and try to make some contacts with it. I’ve been a ham for 22 years but have never done much with 6 meters. This will be a 6 meter summer for me. Join me, I’d love to have a ham radio buddy to share the adventure with.

As the skyline changes…

Here in Manhattan, the highest point above the hustle and bustle, is the Empire State Building. Or, it was at least until yesterday. As of April 30th, 2012, the new One World Trade Center is officially the tallest building in Manhattan. As I listened to the news yesterday morning this got me thinking about the antennas on the Empire State Building, and the logistics and history of them. For those of you fascinated by these things, here are a collection of resources to consult, and some of what I learned about the tallest antennas in the city.

I found a great article on the history of the TV mast at www.lnl.com/esbantennas.htm.  The TV antenna portion was originally a mooring mast for dirigibles which was re-purposed 8 months after the building was completed in 1931.  The article was a reprint from Broadcast Engineering magazine, August 1967.  The mooring mast, which was part of the original design of the building, was supposed to be used by passenger airships for anchoring, while the passengers disembarked down a gangplank to the 102nd floor.  In reality, this proved to be unsafe, as the updrafts and other air currents around the building would not allow for safe mooring.  Only one dirigible ever successfully anchored to the mast after a 30 minute ordeal with mooring ropes, and even then was only able to stay anchored for 3 minutes.  The first entity to transmit from the re-purposed mast was NBC who began experimental TV transmissions from the ESB in December of 1931.  For you fans of  TV’s Fringe, the sequences shot in the alternate universe, show modern dirigibles moored to the Empire State Building, as well as a skyline that still contains the Twin Towers.

Here also, is another great article; from CQ Amateur Radio, March 2011, Digging Deeper With Bill Baker, W1BKR, where Bill visits the transmitter site for channel 13, WNET, in the Empire State Building.  Great pictures of the mast, and of the massive filter network that all signals have to pass through first to reduce interference with each other.

Today there are over 130 antennas on the Empire State Building at various heights.  This site lists the options available to anyone interested in locating an antenna up there.  I’m not sure how many Amateur Radio repeaters are on the building as of today, but one I know for sure is KQ2H.  KQ2H has a large linked network of repeaters that give it incredible range, including a 10 meter input up in the catskill mountains.  I can listen to the ESB 220, 440, and 900 repeaters from my desk at work, and get an idea of what’s going on with 10 meter propagation by taking note of where the incoming stations are.  Lately I’ve been hearing hams from Australia and New Zealand hitting the repeater late nights between 8 and 10 PM EDT.  KQ2H’s 10 meter FM machine transmits on 29.620, and listens on 29.520.  It is usually available on EchoLink, although the link has been down lately.  On EchoLink you need to search for the callsign W2FLA which belongs to the linked 2 meter repeater in the system up in the mountains.

Antenna Mast at the E.S.B. from CQ, March 2011 "Digging Deeper with Bill Baker"

Many of these entities that have antennas on the ESB, relocated there after the Twin Towers fell in the 9/11 disaster.  I was looking for antenna leasing info for the new One World Trade Center building, but nothing seems to be posted yet.  There is definitely going to be an antenna structure on the top of the building though.   I’d love to take a couple of radios up to the ESB observation deck sometime, but I hear the officials can be a little touchy about these things (understandably so).  As I learn more about One World Trade Center I’ll post it at a future date.

Does anyone else out there have stories about antennas on skyscrapers (like the former Sears Tower in Chicago, or even the CN Tower in Toronto)?  Leave some info in the comments.  73.