Sundayday’s of learning was interrupted 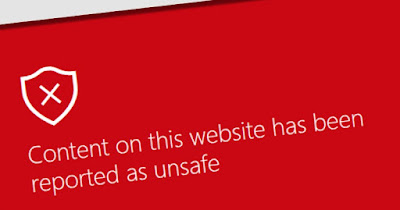 Today I was planning ( you may get the idea by the first 4 words things did not go as planned) to sit down at the radio (Icom 7610) do some reading regarding the radio. I have the Icom advanced manual as well as The radio today guide to the Icom IC 7610 by Andrew Barron ZL3DW. I started up the 7610 without issue found my two above mentioned books. As a sideline, I have been following a conversation on the 7610 I.O. user groups site regarding external monitor issues. The last post it was advised to check the inline fuses? I never heard of inline fuses on a monitor and was just checking online to see if I could see any information. My first thought was someone is confusing the power line fuses in this case. I put the info into my browser hit enter and some sites came up and I clicked on the first site and low and behold my monitor went red in color and I was greeted with the picture above! There was also a phone number (not included in the pic) of "Microsoft" and they could guide me on how to solve the issue. Well, it was obvious to me that this is a scam but my huge issue was my security program did not pick it up and stop the loading. My security program is Bitdefender but more about that in a moment. What happened was my mouse became extremely slow to move around the screen. I was not able to access task manager to close my browser, I was not able to shut my PC down or restart it via menu options. At the time the only option seem to restart the PC by holding in the reset button beside my power on/off button. The PC started without issue and first off I wanted to make sure Bitdefender was running and it was, I then checked to make sure there were no features turned off and all were on. I then opened Malwarebytes (premium trial version) and did a scan and it picked up right away there was an issue. After the scan was done the issue files were deleted. It was time to find out what was up with Bitdefender and why it did not pick up on the issue? I went to their site directly to online chat. In a nutshell, the tech rep only wanted the Malwarebytes log files to be sent and examined. I was disappointed the tech rep did not want to go over my Bitdefender settings to make sure all was on that should be. There really was nothing he did other than having me email the logs. My yearly subscription with Bitdefender is up in 34 days and the handling of this issue my make my mind up either way if I am going to renew or not. Last week I had another question for them and the tech support told me the "back office" would email me a response very soon. Well, guess what I have never heard a thing from them so let's see what comes of the log file submission.

6 Responses to “Sundayday’s of learning was interrupted”