It seems to have evolved that the time I think of doing some DSTAR operating is when I’m out in the garden on a Sunday morning doing whatever chores are possible or needed (possible relates to the winter weather!). This morning, I popped out to clean out the henhouse for the girls and booted up the Raspberry Pi and DVAP.  Happily it came up straightaway, which isn’t always the case and I ventured out.

As usual, there were some nice QSOs to be had; Tom AA8RT in Dallas, talking about the winter storm they’d had last week, Ian VK6SKY who, at the other end of the temperature scale was having a really hot summer with over 40C. Another really nice QSO was with John LA2QAA on Frei Island.

John is kind enough to read this blog (hello John!) and it was interesting to talk to him about some of his satellite experiences, as a control station for Oscar-7 as well as how difficult it is to use the SO-50 satellite from his high latitude.

After I’d finished the nice QSO with John, it just came onto rain, so I finished off freshening the henhouse and ventured in.

I took the opportunity to update the G4KLX ircDDBGateway and DVAPNode software on my Raspberry Pi to the latest versions (20131001 and 20130904 respectively) as it was a little while since I’d done that. 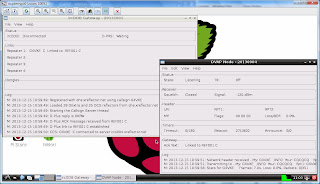