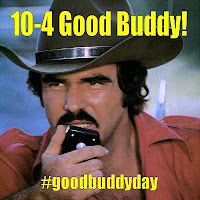 As much as I hate to admit it, for a few short weeks every summer, I become ... get ready for it now ... a CBer! Now I'm not talking about what might typically come to mind when thinking about CBers ... for me it's more of a love-hate relationship. You see, the 27MHz CB band, and 27.385MHz in particular, happens to make one of the best indicators of Sporadic-e openings on the face of the planet. Unlike the vast empty wasteland that 10m becomes during the summer, the 11 meter band is jam-packed full, with thousands of operators ... and some days it seems as if they are all on the 27.385 MHz (LSB) calling frequency.

With my receiver quietly running in the shack, the frequency can suddenly jump to life, with hundreds of stations calling each other in a matter of seconds. Sometimes it's like a switch has suddenly been thrown to 'ON'. This is not too hard to understand as the present suspected cause of Es is sudden high speed wind-shear within the E-layer. Have a quick listen to what the calling frequency can suddenly sound like:


Now the beautiful thing is that strong Es on 11 meters usually heralds the possibility of 6m also opening via the same mode ... usually 30 minutes or so later if it's going to happen. Often a CQ on a seemingly 'dead' 6m band in the direction of the 11m Es, will produce a response from an equally surprised operator at the other end.

I don't think I've ever heard Es on the 6m calling frequency without hearing Es on 11 meters beforehand. It's been my experience that the band always opens from low to high, in terms of frequency, so it just makes sense to listen lower (11m) to get a heads-up for what is likely soon to follow on the magic band. As well, knowing that there is 'zero' Es on 11m, can let you rest assured that nothing will be happening on 6m via Es ... at least for the time being.

If you haven't already tried it and have a second receiver that can be put to use as an 'Es-monitor', you might be pleasantly rewarded. Even though knowing that the band will soon open might rub a bit of the magic away, I think it's still well worth it!
Steve McDonald, VE7SL, is a regular contributor to AmateurRadio.com and writes from British Columbia, Canada. Contact him at [email protected].

One Response to “Summertime CBer”