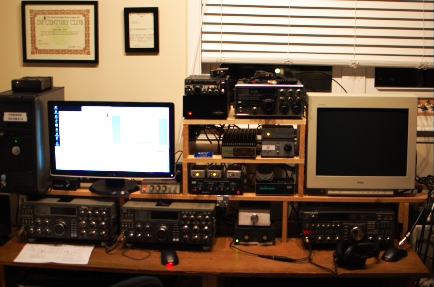 For while, I had three computers stuffed into two operating positions at K8GU and things were just getting out of hand as far as keeping the software updated, the clocks synchronized, and LoTW uploaded—as well as just plain having space on the operating table.  So, I moved the venerable sakhalin into backup, spent $18 on USB-to-RS232 adapters and a few hours over the past two weekends reorganizing the operating table.

The new arrangement replaces a monitor with two small shelves (which are designed, I might add, to hold exactly two T2X control boxes).  I moved the DC power distribution system to be more centrally located and made room for some accessories that I’ve been meaning to move into arm’s reach.

Software is a different story.  I have been test-driving N1MM in VHF contests which are slower-paced than their HF counterparts.  As a die-hard TR-Log user, it’s difficult to make the switch.  I decided I had to go cold turkey.  I am presently trying TR4W, which is a very good clone.  However, it does have idiosyncrasies—the biggest of which is the behavior of two-radio mode.  When CQing on Radio #1 in TR-Log, ALT-D lets you dupe a station on Radio #2 then hit the SPACE bar to call that station on Radio #2.  With TR4W, ALT-D changes the focus to the Radio #2, but does not dump your call in, a step which requires you to hit ENTER.  The other small thing is that the delightful emacs key-bindings CTRL-W and CTRL-K do not wipe the present and both (call and exchange) entry fields in TR4W.  But, I’m getting the hang of using ESC.

Another thing that will take some getting used to is the fact that if the TR4W window loses focus, I can’t use the CW memories!  Fortunately, the paddles are close at hand!  For serious operating without sidetone, this won’t work, though.  Speaking of paddles, I’ve found that putting the paddles on the keyboard tray and the mouse up on the operating table is actually good as far as keeping mouse usage low.  Plus, the paddles remain at a comfortable height for sending.  Great arrangement!

Lots of other little projects around the station remain…