Spring is finally making an appearance in the Rocky Mountain region which means it is time to get on top of some SOTA peaks and transmit some RF energy. On Saturday, Joyce K0JJW and I had planned to drive through the Big Thompson Canyon to Estes Park and also sneak in a quick SOTA activation. Matt K0MOS suggested a few peaks and we chose Prospect Mountain (W0C/FR-069) just south of Estes Park. See Matt’s trip report for a good overview of the hike. 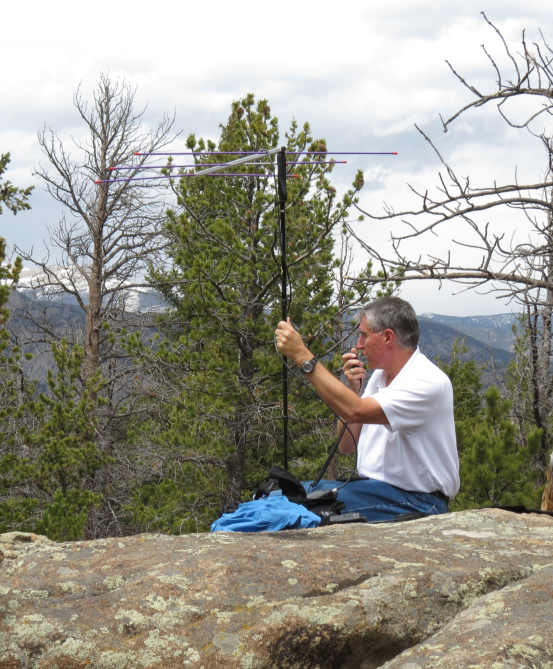 For a low hassle SOTA activation, I usually just take my Yaesu FT-60 handheld radio and operate 2m FM. Most of the VHF activity is on FM anyway and I usually rustle up some SOTA contacts that way. On this trip, I also brought along my Yaesu FT-817 so that I could operate 2m ssb, to provide better weak signal options.  For SSB operation, my 3-element Arrow yagi antenna was mounted on my walking stick for easier pointing, with horizontal polarization. 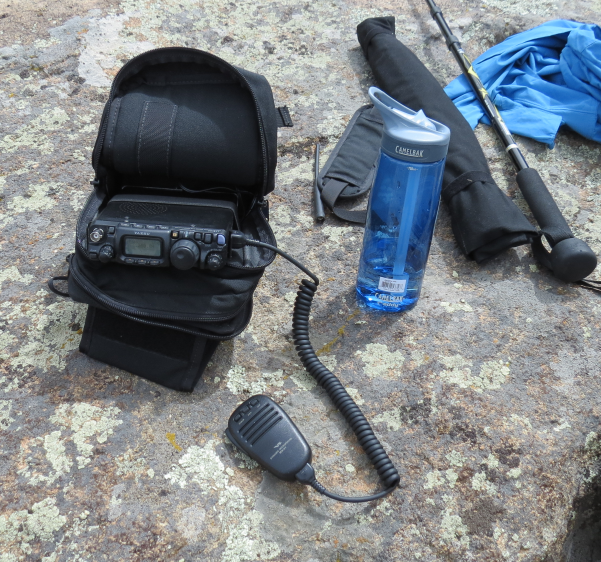 The above photo shows the FT-817 in its Sitting-On-A-Big-Rock operating position, using the AMP-3 carrying case with lead-acid battery inside.

I had arranged a sked with Stu W0STU who was located ~100 miles away with a group of Scouts at Peaceful Valley Scout Ranch. There wasn’t a solid radio path between our two locations, so I wasn’t sure if we’d make it or not. I did not think we could make the contact on FM but the efficiency of SSB should do better. He had a small yagi pointed in my direction driven by an FT-857 transceiver but we tried working on 144.200 MHz SSB without any success. Another station W6LEV near Loveland came up on the calling frequency so I worked him.

After working a few stations on 146.52 MHz using a half-wave whip on the FT-60, I decided to try to work W0STU one more time. I sent him a text message and confirmed that he was available. However, snow was moving into his location (welcome to spring) so  he had dismantled his yagi antenna and only had a vertical antenna on his truck. I told him to give me a call on 144.200 SSB and I’d try to find him. I flipped my yagi to vertical polarization and pointed in his direction.

At first, I heard nothing but noise. I was about to give up when I rotated my antenna around to see if the signal peaked up in another direction. Sure enough, when pointed S/SW, I could hear Stu’s signal rise to just above my noise floor. His actual direction from me was SE, so we were probably getting a reflection off one of the mountains to the south.  My signal was right at his noise floor, so we just barely completed a contact. Without the weak-signal performance of SSB and the gain of the yagi antenna, I am sure we would have never completed the contact. Another lesson is that it pays to point your antenna in different directions, since you don’t always know what the best propagation path will be.

Another fun day messing around with ham radio.