The first bit of live data I received from my APRS VHF propagation alert reflector was a warning of a possible Sporadic-E opening on six metres. I was rather surprised that there was Sporadic-E this early in the year, but I went to the DX Sherlock website and sure enough contacts had been reported between a station even further north than here and one in the Czech Republic. I then clicked on the map to see the actual contact details and was surprised to find they were WSPR spots! 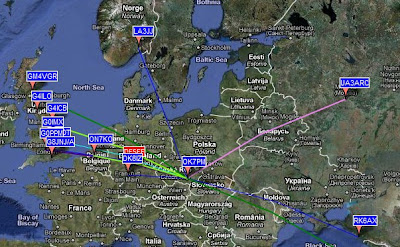 I went to the WSPR website and sure enough the same signals were shown. I decided to fire up WSPR on 6m myself but by then the OK station had gone and no new spots appeared from anywhere.

I have been, and still am, somewhat sceptical of the value of WSPR in showing VHF Sporadic-E propagation. One of the characteristics of Sporadic-E, particularly at the start and end of the season or on the higher frequencies like 2m is that it is very fleeting. A signal can be there for one minute, literally, and gone the next. On the other hand, signals can be really strong when reflected by Sporadic-E. WSPR is designed for detecting weak signals under steady propagation conditions and uses a 2 minute transmit cycle during which the data is transmitted very slowly. It seems to me that what you want to detect Sporadic-E is a mode with short transmit cycles where the data is transmitted quickly, perhaps something more akin to the modes used for meteor-scatter. I wonder if K1JT could come up with something?

Nevertheless I am very interested in anything that helps to detect VHF openings that might otherwise go undetected. I plan on WSPRing more on the 6m band, as long as there are others doing likewise so there is a chance of being received!