For the 2014 Colorado 14er Event, Joyce K0JJW and I decided to try a summit close to our cabin near Trout Creek Pass. The basic idea was to activate a non-14er SOTA peak with good VHF paths to all of the Colorado mountains. We also wanted to demonstrate the idea of activating Summits On The Air peaks during the 14er event. 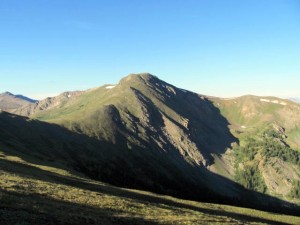 We chose an unnamed peak (W0C/SP-042) that rises to 12,792 feet near Cottonwood Pass . This summit was already on my list of SOTA peaks to activate, so that was another plus. The trail starts at Cottonwood Pass, right on the continental divide and runs along the divide for about 2 miles. 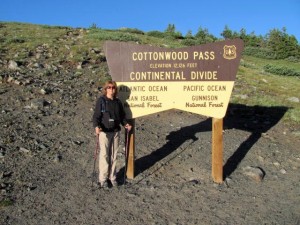 In fact, we followed the Continental Divide Trail (CTD) to get to this SOTA peak. I’ve done several backpack trips on the CTD and its always a blast to be walking along the top of the continent enjoying the awesome views. 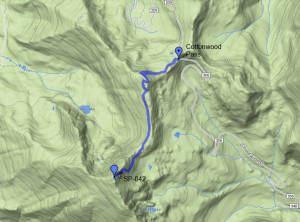 The trail starts at Cottonwood Pass and runs along the Continental Divide.

The main trail passes over the top of another summit at 12,400 feet before continuing on to SP-042. The trail does not go to the top of SP-042, passing it on the east side. We just stayed on the trail until we were due east of the summit, then climbed up the east side which turned out to be a bit steeper than it looked. On the way down, we left the summit by following the ridge a bit to the south and found a gentler route back to the trail. Also on the way back, we followed a side trail to the east of the 12,400 foot summit, saving some vertical gain and loss. My GPS app on the iPhone logged the one-way distance as 2.2 miles (including going over the first summit). It looks shorter on the map but the switchbacks add some distance. 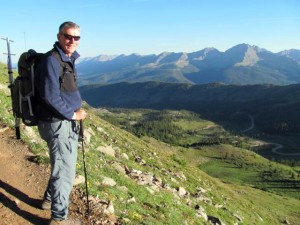 After we reached the summit around 9 am, I quickly assembled the 2m/70cm Arrow antenna and mounted it on my hiking stick. Once I had the FT-817 up and running, I spotted myself on Sotawatch.org using the SOTA Goat app. Logging was done with HamLog on my iPhone. 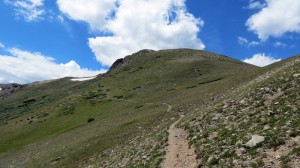 Typical trail conditions on the CTD.

I worked a number of mountaintop stations on 2m fm (147.42 and adjacent simplex frequencies) with the best DX being N4MMI on Redcloud Peak, about 80 miles away. I tried calling on 2m and 70 cm SSB without any luck. Joyce made a few contacts on 446.0 MHz using an HT with a vertical antenna. 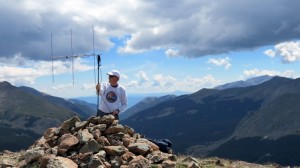 The weather cooperated all morning with mostly white fluffy clouds. We stayed on the summit until noon and then hit the trail back to the pass. This hike is now one of our favorites, really good for visitors that want a taste of hiking above treeline with great views.