Joyce KØJJW and I were headed to the Duke City Hamfest in Albuquerque when we decided to make a side trip up Sandia Crest for a low overhead (read: slacker) Summits On The Air (SOTA) activation.

The view of the summit when approaching via the Sandia Crest Road.

Sandia Crest pokes up 10,678 feet, towering over Albuquerque at roughly 5000 feet. Although the weather was rainy, we enjoyed the drive up the paved Sandia Crest Road through the Cibola National Forest. This looks like a great area to explore and we’ll probably be back sometime in the future.

At the parking lot, about 40 vertical feet below the summit, we paid the $3 per day use fee (self-service USFS station), grabbed the radio gear and headed up the walkway to the top. There is a gift shop and restaurant at the south end of the parking lot, along with several hiking trails. A large radio site on the north end of the parking lot has numerous towers and high power transmitters. The field strength is so strong that a sign has been placed there to warn of radio interference to car alarms and keyless remotes. 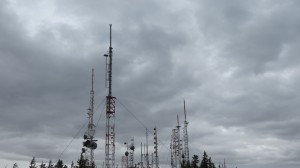 There is a large radio site with powerful transmitters near the summit.

I pulled out the trusty Yaesu FT-60 handheld transceiver with the MJF-1714 1/2-wave antenna for 2 meters. I gave a few calls on 146.52 MHz and heard no replies. I am thinking, “surely with so many hams in town for the hamfest, someone is listening on five two.” Joyce was standing next to me with her FT-60 and a rubber duck antenna. We noticed that her radio was hearing signals that I could not hear. 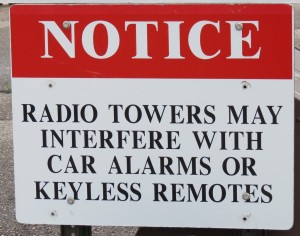 Well, this sign did warn me of radio interference.

Hmmm, the radio with the better antenna is not able to hear anything but the radio with a crummy rubber duck is working fine. At this point, I realized that my HT was being overloaded from the transmitter site with my high-efficiency antenna doing a great job of coupling those signals into my radio. I had to chuckle about this since I’ve often pointed out the poor performance of your typical rubber duck antenna. In this case, the less effective antenna was doing us the favor of reducing interference.

I swapped antennas and began making calls on 2m fm with the rubber duck. I also moved further away from the radio site to reduce the signal level. Yep, now I heard some guys coming back to me on 146.52 MHz. I could tell there was still some interference but it was workable. In short order, I had these stations in the log: KE7WOD, W5AOX, K5LXP, WB5QXD and K0JJW (after moving downhill outside of the activation zone),. Thanks for the QSOs!

I will admit that NM5SW mentioned the interference problems on this peak, so I had fair warning. Keep in mind that the FT-60 has reasonably good intermod performance, probably better than your average HT, and was getting completely blocked with the long antenna. I was glad that I was not using one of the Baofeng HTs. It made me wonder how well my FT-817 would do under the same conditions, but that will be a test for another day. 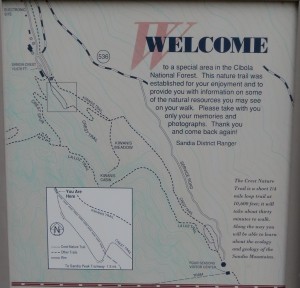 This sign shows the trail system at the summit and the location of the tram.

Another way to ascend the peak is via the Sandia Peak Tramway, which comes up from the Albuquerque side. We came across this sign that shows the trail system near the summit and indicates the top of the tram (click to expand). The tram drops passengers off some distance from the actual summit, so you’ll have about a 1.5 mile hike to the summit.

In summary, it was a successful activation although the weather could have been better. The big thing I learned was that a more efficient antenna is not always the best antenna. Sometimes a crummy rubber duck does better!

P.S. I later heard from Mike KD5KC that the Kiwanis Cabin (shown on the map) is a good place to operate from without radio interference issues on HF and VHF.