SOTA Expedition to NM and CO

Last week was a great week. I took a week of vacation and my wife and I headed to the mountains. We flew to Santa Fe, NM on Monday and that night had a nice dinner with local SOTA enthusiasts’,Fred KT5X aka WS0TA, John K1JD and Doc K7SO and their XYL’s. It is always nice to get together with friends with similar interests. We had a lot to talk about as we planned to do two 10 point SOTA summits the next day, a doubleheader if you will. We would work in teams of two and summit the separate peaks at roughly the same time. This would allow us to have summit to summit (S2S) QSO’s  with each other. The S2S contacts count toward a separate award within the SOTA program. We would then descend from the peak we were on and ascend the summit that the other team had just activated. You must make 4 QSO's from each summit for it to qualify for activator points.
Since the forests were closed in the Santa Fe area due to high fire risk we went east of Taos, NM. Our activation targets were W5N/SS-019, Peak 10,900 and W5N/SS-024, Sierra de Don Fernando, both are 10 point peaks and are in excess of 10,000 ft. ASL. The activations went well, making HF contacts t qualify the summit and VHF, S2S, contacts with our buddies on the other summits. My portable station, documented in my previous post, worked very well. I used my ATS-4 transceiver,  an EFHW strung up in a tree for an antenna and a 500 mAH lipo battery for my power supply.. We had a great time and only had a few rain drops fall on us. We were deep in the forest and the smells and sounds in the mountains are very therapeutic. The plan almost worked to perfection. Fred, Cris (XYL) and myself were on one team and John and Doc on the other. We were down from the second summit when Doc called in on 2m to let us know that they had a flat tire. So we were forced to wait on them in the cool forests of New Mexico.
After successfully activating these two summits we said goodbye to our Santa Fe friends. We then headed to visit Jeff, my old backpacking buddy, and his wife Becky in Red River, NM. There are several 10 pointers in the Red River area and we decided to just do one, Greenie Peak, W5N/SS-015, on Wednesday morning. This would allow us more time to visit and catch up.
Wednesday turned out to be an adventurous day.  The Greenie Peak activation went well. There are beautiful views from there and it has a large summit area. Despite poor propagation I quickly filled the log and we determined, with thunder in the distance, we should head down. 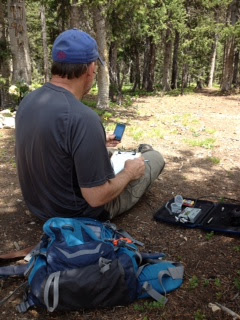 Operating on Greenie Peak, NM
My Station is on the right
On the way down however, we saw a sign on the trail to Sawmill Peak. Sawmill is another 10 pointer that I had considered but there is no trail to the top. After seeing the sign, I thought maybe I had found a trail no-one else had found. The 4WD trail dead ended into what appeared to be a hiking trail. It was not, but lead to a bushwhack over 3 lesser peaks to finally reach Sawmill. Again, the summit wasn't planned. We reached the summit, started deploying the antenna and the skies opened up. There are commercial antennas on the top of Sawmill and we found refuge under a pier and beam building there. We got wet. After an hour and a half rain delay we set up again in light rain. My hands were wet and cold and the micro key seemed very small and I had considerable trouble operating it. The rain continued to fall.

I called CQ for 10 minutes before NS7P called and then spotted me. We made a few more QSO's despite the keying problems and qualified he summit. Thanks for those who stuck it out with me. We hiked back in the rain, but with 20 points in the bag rather than 10. Is was a satisfying day, activating Sawmill Mountain, which had only one previous activation, unexpectedly, felt good.
On Thursday morning we bid farewell to our friends and headed north to Colorado. We planned to climb Mt. Sherman which is 14,036 ASL. I previously have climbed 6 of Colorado’s 54 14’ers, but I haven’t done one for more than 15 years. I live near San Antonio, TX, so acclimation to altitude is always a concern.  I keep myself in decent shape, but the question in the back of my mind was, “can I still do it”. This climb and activation would culminate a great week of SOTA activations. All four summits for the week were 10 pointers, so going into Friday the  plan had gone very well, but the big target for the week was Mt. Sherman, 14,036’ ASL.
My XYL  (who has five 14ers to her credit) and I had re-conned the trail-head on Thursday afternoon. There is a gate, open in the summer, and we found that you can drive a long way up the mountain, if you want to, probably close to 12,800 if you have a 4WD. However there were no cars at the trail-head at the time so I wasn't sure where the typical starting point was. So the next morning we arrived at the gate at a little before 7:00 am. There were a handful of cars already parked outside of the gate, but none were parked past it. I didn't want to be the guy that drove his car way up the hill, when everyone else starts at the gate. So we parked there and were quickly on the trail/road up the summit. We followed a local guy, who seemed to know what he was doing, however it turns out that he didn't. We missed the main trail, i.e., the road that goes to 12,800, and is relatively easy hiking. Instead stayed left and climbed up a fairly steep pile of rocks to the old mine. That snafu, while not really adding any distance, probably added 30 minutes to our time. We realized this when we go to the top of that climb when a couple came walking up the road that goes around the rocky slope. Oh well, as my friend Jeff says,” If you know what’s going to happen, it’s not an adventure”. 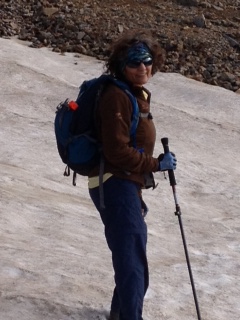 My XYL Cris on the way up Mt. Sherman
The rest of the climb was just the grind that all 14ers are. You settle into a pace, enjoy the views and try to breathe. We summited at 9:30, a little later than I had hoped, since there was an outside chance I might do Mt. Sheridan, another 10 pointer, which was a across the ridge from Mt. Sherman. We actually felt pretty good at the top, tired by not overly so, and no altitude induced maladies. We enjoyed summiting another 14’er, the views are magnificent.
So now to the radio. I had used an EFHW all week but, in the deluge of rain and hail on top of Sawmill Mountain the previous Wednesday, I had lost the buttons I use as guides for the antenna wire on my crappie pole. So I decided to take my back up Buddi-stick vertical. I've had good luck with this antenna before and it’s very quick to deploy. However, for some reason the SWR was high and  I couldn't get it down with quick adjustments of the radials, so my signal suffered in what weren't good conditions to start with. I started well with an S2S with NM5S who was on Mt. Windom in Colorado, another 14er, but then it became hard work. NS7P called in with his usual loud signal and gave me good report and then WA2USA followed with a 229. After that I didn't get any calls for what seemed like an eternity. After several fat finger, altitude induced mistakes, I finally was able to post that I needed one more QSO via my iPhone, and W0MNA, W6UB and ND0C called in. Looking to the west I could see that, while still a ways off, rain clouds were forming. So I packed up. Not a glamorous activation, but it counts. With rain clouds on the horizon, I decided to leave Sheridan for another day. 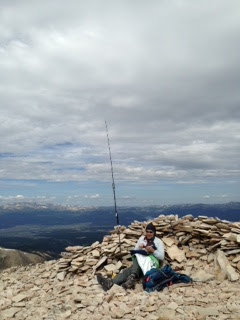 On our way down, at around 13,500 ft. we encountered a husband and wife climbing with their 4 month old daughter.  While it is a courageous thing to do, I wondered about the wisdom of such an adventure. My wife said that seeing that made her feel like a wimp. Despite that we pressed forward and made steady progress down the mountain as the rain clouds formed. It always surprises me that people will start up a 14er at mid-morning. We encountered several who were on the way up as we were descending that clearly would not summit before noon, which is the time you should be off the mountain. This time we took the road rather than descend the rocky slope that we needlessly climbed on the ascent and it was fairly easy going once we reached that point.
After we made it back to the car, my XYL and I high-fived, having proven to ourselves that “we still got it”. As we did that, the first rain drop fell. As I shut the door of the SUV, the hail started falling and the clouds let loose. Perfect timing for us, down just in time, but I couldn't help but think about that little 4 month old. I hope the parents were prepared to keep her warm and dry. 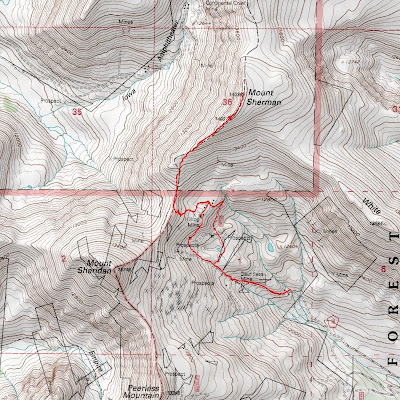 The hike is 5.2 miles round trip  and ~ 2200 feet vertical gain from the gate. The red track above illustrates our route up and down Mt. Sherman. The left route on the way up is not easiest way up. The red dot on the summit plateau is where I operated from.
So another double header of sorts, another summit activated and finally another 14er climbed. What a great day. For the week, 50 activator points, 76 S2S points and 36 chaser points; not too bad. 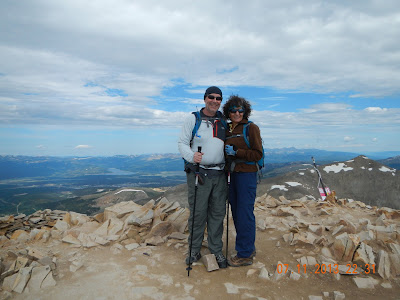 AD5A and XYL Cris on the summit of Mt. Sherman
(date and time wrong on the picture)
Mike Crownover, AD5A, is a regular contributor to AmateurRadio.com and writes from Texas, USA. Contact him at [email protected].