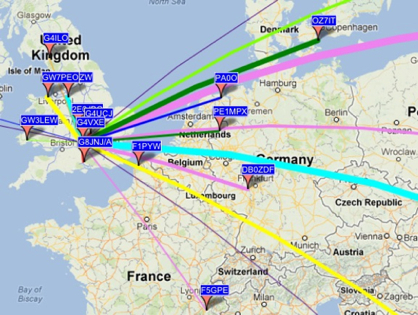 Today doesn’t seem to be a massive DX day on 28MHz. But actually it’s just as interesting, although the plots are much closer.

Some of the distances of stations that I’ve heard this morning – between 300 and 600km would normally be in the 28MHz skip zone. In the days when I used to see how many countries I could work each year, countries like PA, ON and GW were hard going on 28MHz unless you found some backscatter.

Look at the map from this morning! The PAs, the French station just the other side of the channel, GW3LEW and yes, Julian, G4ILO! Very unusual conditions and I’m absolutely delighted to have copied Julian on his magic loft dipole.

Perhaps some Es around – certainly I was getting some big signal reports from the Ukraine this morning. It’s unlikely that any of the contacts I’ve highlighted here are ‘classic’ Es but maybe some sort of weak scatter from the layer.

I’ve seen hints of this type of propagation in the mornings a few times now, but this is the best example I’ve experienced since I began my 28MHz WSPR activity this year.