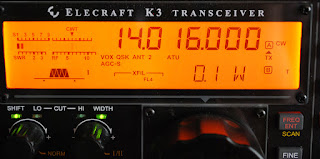 This week we all have seen sunspot 1515 working overtime producing solar flares.  It has been some time since a sunspot has consistently produced M class flares sometimes 2 or 3 in the same day. As amateurs we like to see rising sunspots, rising Flux numbers and a falling K index. ( as a side note this link is a great index for all those propagation words you wonder about)...BUT....along with an active sun also can come increased solar flare activity, increased solar wind which can bring a downturn for radio conditions. As a QRP/QRPp station I take these conditions as a challenge I also understand that during these times for me DX may mean contacts in the U.S. This week I have tried to get on the radio for a short time each evening. Using the Reverse Beacon Network (RBN) has been a great help giving me an idea which bands were open and just where my CW signal was being heard.  Below is the results of one of my RBN sessions
20m report
NY3A  in P.A.         11dB
K3MM in M.D.        21dB
WZ7I    in P.A.       18dB
K1TTT in M.A.       11dB
KB9AMG  in W.I.     9dB

Most of the time I would be heard in Europe but with conditions the way they are the U.S. seems to be my DX destination for the time being.  I fired up the K3 along with DxLabs. Right off the bat I saw lots of spots for Europe but was not able to hear them on this side of the pond. I then heard an S5 signal from SM5EPO from Sweden. I knew conditions were not that great and after all the RBN confirmed that on 20m's it was the U.S only.........So I dropped the K3's power to 100mW's Heee Heee Heee and gave it a go. SM5EPO came back to me and with a few repeats the contact was complete at 39,111 miles per watt. In the past when conditions were good and I was making QRPp contacts and logging the miles per watt I wanted to see how I would do if conditions were not ideal.

2 Responses to “Solar storms VS QRPp”