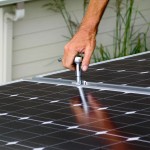 Finally everything fell in place… my shack is running on solar power only. An idea/project I have been pursuing for years but the circumstances were never perfect… until this July. Last fall, a hailstorm took care of the roof and I had to replace it. In July I was able to secure a large chunk of money from our City which is offering a (very) limited number of rebates for Photovoltaic (PV) installations. Together with the federal tax credits it will put the ROI within my life expectancy. Good enough for me. 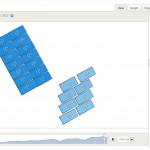 The complete system is a grid tied, 5.5 kW system – 22 panels organized in two arrays (one south and one west facing). Each panel has a microinverter to optimize production and to add some ‘intelligence’ to the system. Monitoring and trouble shooting is a breeze. I can literally see when a bird poops on a panel and degrades my production 🙂

Since my shack consists only of a Yaesu FT-817, I am using the excess energy in the rest of the house. It should produce over 100% of our typical electricity usage per year if everything goes according to plan – I guess time will tell.

Here a short clip of the installation:

Matt Schnizer, KØMOS, is a special contributor to AmateurRadio.com and writes from Colorado, USA. Contact him at k0mos at schnizer.com.