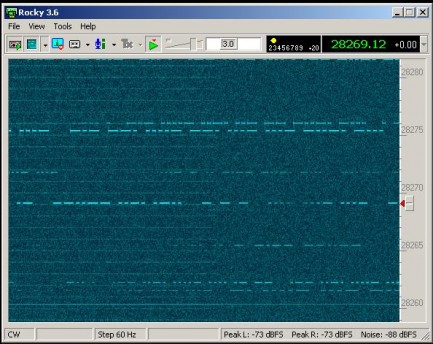 Got the SoftRock v9.0 Lite+USB Xtall working last night.  I’m not 100% sure what the problem was, but I think it may have been due to me programming an ATTiny85 with the latest SoftRock firmware (V15.14), rather than using the supplied ATTiny45 with V15.4.  So, I’m sticking with old version for now.  Not sure if it was cockpit error on my part programming (more likely) or an incompatibility with the new firmware which is designed to work with the Ensemble series of SoftRocks.

As shown in the screenshot from Rocky above, there appears to be a spur that repeats every 1 kHz (see left side of the waterfall).  The right side of the waterfall is with the USB cable unplugged from the computer.  I’m 99% certain this is something internal to the SoftRock because I wrapped a few turns of the USB cable around a big type-31 ferrite toroid and the spurs are still there.  So, need to play with that.

I’m listening to a Es opening to the south on 50 MHz right now using the SoftRock as the RX IF.  Yes, that means that I got the RX on the transverter souped up a little hotter.  I will post something about that later today and place a non-causal link in this post.