Skunked at the park 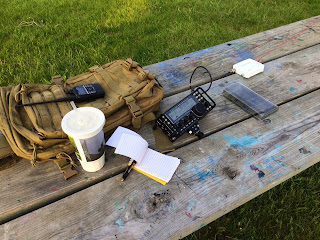 Daughter #3 needed a ride to the big city and then picked up 2 hours later. Rather than adding extra miles to the jeep, I took along the kx3 and end fed portable antenna. A quiet spot was found at Maxwell Park and up went the antenna in a white pine. That was the end of the success for the night though as I got skunked – not a single contact. I did fight with the antenna a bit. I didn’t bring the counterpoise wire and so that meant the coax and me were the ground. The bands seemed awful. Maybe everyone was out enjoying the nice weather, or that solar flare yesterday was worse than I thought. Don’t worry…I’ll be back!
Michael Brown, KG9DW, is a regular contributor to AmateurRadio.com and writes from Illinois, USA. Contact him at [email protected].