After being absent from 2m EME (moonbounce) for the past couple of years, I decided to spark-up again this spring to see if my simple system was still up to the task.

Pretty much every month, during the moon’s sweep through its northern declination, I get several days with moonrises right out in front of the house overlooking Georgia Strait. This is the large body of saltwater separating the British Columbian mainland (and the rest of North America) from Vancouver Island to my west.

Having an ‘over the ocean’ moonrise offers several advantages for me as it pretty well guarantees an extra 6db minimum of system gain (both on transmit and receive modes) and provides a noise-free environment for the antenna to look into.

Because of this advantage I’ve been able to get away with a very minimal system consisting of a single 9el Yagi and a small FM ‘brick’ amplifier which yields around 120W of output. The antenna is tower-mounted at 60’ and controlled in azimuth only. Without being able to track the moon as it rises, the Yagi is broad enough to give me about 2 hours of moon-time on each session before I start to lose signals. With most EME stations using four or more Yagis and high power, most of the heavy-lifting on my two-way work is being done by the other station. With the extra sea-gain here, my single 9el Yagi performs more like an array of four similar Yagis.

There always seems to be new stations to work whenever I get on the band and this spring was no exception. All told, I had 20 contacts, with 12 being new 'initials', bringing my total initials count to 130. The remaining 8 contacts were with stations I have worked previously. I was also able to add 2 new states, New Hampshire and Wisconsin, bringing my 2m WAS total to 30.

Conditions were poor to average, with one day in particular being excellent, when at one point I had a pileup of three callers!

Most of the stations contacted are always surprised to learn of my small system and comment that my station is the smallest one they have worked. I have worked a couple of two-Yagi stations over the years with one of them being worked several times.

Here are the cards that have arrived so far for this spring’s session: 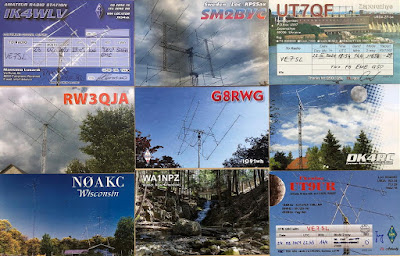 If you haven’t given single-Yagi EME a try I would encourage you to test it out as you might be surprised at your results. Even without the added sea-gain, many of my contacts were loud enough to be easily workable with 6db less gain ... and there are dozens of big capable stations out there just waiting for new initials!

One Response to “Single-Yagi EME”