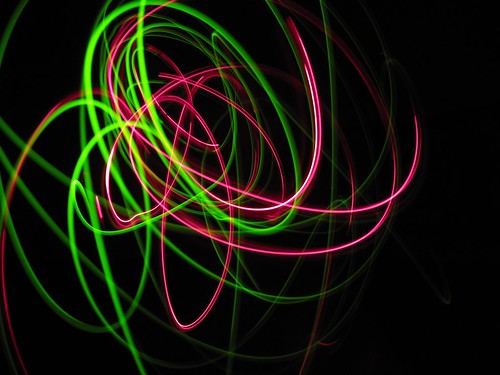 Ginny, my wife, is a one of a group of leaders for a Brownie pack in a nearby village. Last week we showed the Brownies some simple electronics and they had some fun with a really simple circuit.

We had them put a number of LEDs onto a 3V button cell, rather like a LED throwies but without the magnet.  Once they had an arrangement of three or four LEDs on a cell Ginny took photographs of them in a darkened room as they waved the LEDs around.  Taking a photograph on a slow file speed setting (ISO 80) and over a relatively long period (15 s) the Brownies created some great art by ‘painting with light’.  As well as the example above, a small selection is shown below. 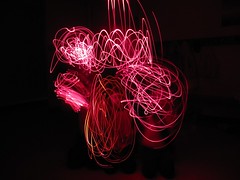 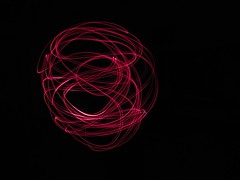 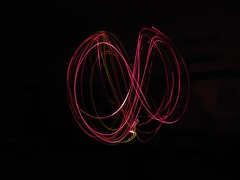 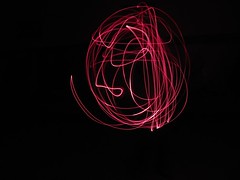 There was about 22 or so Brownies and we had them work on an LED ‘circuit’ in pairs.  They really enjoyed the fun of arranging the LEDs and working out which way around to place them. However, I think they had the most fun with the ‘drawing with light’.

While some were involved with the photography I showed others the fun that could be had with electronics and how circuits could make things work.  To do that I showed them how I could not light up an ultra-bright LED with a used 1.5V battery on its own.  But, when I used a few components, connected into a Joule thief circuit, then the LED would light up brightly with the 1.5V battery.  I also had some plastic optical fibre too and they had fun watching light bending around corners.

We kept the exercise simple and very visual and they all seemed to enjoy it.

If you want to make your own Joule thief you may find the Make magazine podcast below interesting and useful to watch.