Should I or shouldn’t I? 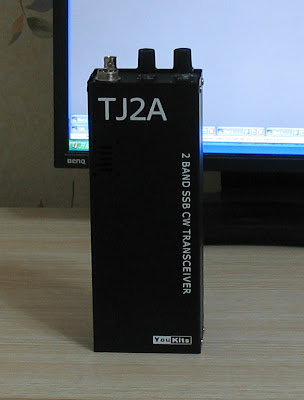 Thanks to the latest blog post from John AE5X I have the web page for a new QRP kit open in another browser tab and the pointer keeps hovering over the Buy Now button. The kit in question is the TJ2A, a two-band handheld SSB/CW transceiver for the 20m and 40m bands that has just been produced by YouKits of China.

Regular readers of my blog will know of my fondness for handheld radios. I’m finding this one very hard to resist even though I have an FT-817 and so no need for another handheld 20m/40m radio. At this point in my life I’m not even sure if building it is still within my capabilities. If I did try, it would be the most difficult kit I have attempted since my Elecraft K2, and I built that 12 years ago when my eyes were a lot sharper and I was not suffering the after effects of a brain operation. Should I or shouldn’t I?

The TJ2A looks like an updated and improved version of the Mizuho HF handhelds that were produced during the late 1970s which still fetch a tidy sum whenever they change hands on eBay. Like the Mizuhos, the TJ2A is VXO controlled and covers a portion of each of the two bands, though you can install alternative crystals if you would prefer to have full coverage of one band in two ranges. You could also choose other bands by changing the VXO crystal and bandpass filters.

The building instructions are on the web and it looks as if the kit uses mostly through hole components but there are some SMD transistors. It isn’t perfect. There is mention of warm-up drift in the first 5 minutes after switching on or changing bands. There is also a mod already to stop BFO leakthrough into the IF stages. And there doesn’t appear to be any high SWR protection for the PA so using the rig with handheld antennas – or any type of antenna that presents a mismatch prior to tune-up – might be problematic.

But it looks really cute. And it’s a kit. There are few things in ham radio more rewarding than hearing the first signals, then making the first contact, on a radio you built yourself. Should I or shouldn’t I?

7 Responses to “Should I or shouldn’t I?”