Round the back way 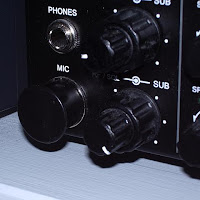 Back in the early QRP days of Elecraft, there were some K2 owners who were such CW diehards they were uncomfortable with having a radio that possessed a microphone socket. One or two of them described to the Elecraft email reflector how they had blanked off the offending socket. Despite the evidence in the picture on the right, I have not joined this fraternity. I have simply started using the rear microphone and PTT connector on my K3. I have thought for some time that the front panel connector is an accident waiting to happen, and I finally decided to make the move before it did. (And before anyone comments about the dust in the photo let me just say that one of the few benefits of deteriorating eyesight as you get older is that you don’t notice it!)

Front panel microphone sockets are pretty much the norm in ham radios. However in most radios they are secured directly to the metal front panel or, in the case of radios with a plastic fascia to the metal chassis behind it, using a locking nut which tightens the chassis against the ring cast into the socket so that it is rock solid. You could tug at the microphone cable all you want or bash the connector with a hammer and you would be unlikely to cause any damage to the radio itself.

In the K3, the microphone connector comes soldered to the front panel board. There is no possibility of securing it to the metal front panel. The ring that would normally sit on the outside of the mounting hole actually slips through the hole in the front panel so all the rigidity is provided by the PCB. The front panel hole limits movement up and down or side to side to a certain extent. But it does not provide any protection from movements fore and aft. I wonder about the effects of constant small side to side movements on the soldered joints connecting the pins to the board. And I feel sure that if I accidentally leant on the microphone plug, supporting my weight as I tried to make some connection round the back, I could damage the front panel PCB by snapping the microphone socket right off.

As the outer body of the microphone connector is not physically attached to the radio itself it is not electrically grounded. Whilst installing the K144XV transverter board I noticed that grounding is provided by a piece of bare wire that loops round the threaded part of the connector and is soldered to the front panel board. This may have been a modification that I did myself when I assembed my K3 three years ago. What this wire loop does not do is prevent the outer metal part of the microphone connector from turning relative to the insulated centre bearing the 8 pins that are soldered to the PCB.

Because of the perceived risk of damaging the front panel board by accidentally putting my weight on the microphone plug I have been in the habit of disconnecting the microphone whenever I need to lean over the K3 to grope round the back. So the microphone connector has been on and off rather a lot. Recently I observed a tendency for nothing to happen when I pressed the PTT on my desk mic after reconnection. It then became apparent that the outer metal part of the plug has become slightly loose and can be twisted several degrees relative to the centre. I’m pretty sure this is due to the plug body not being secured to the chassis of the radio so there is nothing to take the strain of tightening and untightening the microphone plug. Hence my decision to give up using the front panel socket and move round to the back before the problem got any worse.

My shack is very cramped so I had shortened the cable on my Heil desk mic to eliminate unnecessary length when plugged in to the front of the K3. Consequently it would not reach round to the back. Rather than rewire the microphone I decided to make an extension cable using a line 8-pin socket, retaining the option of using the front connector if I want. I purchased the line connector quite inexpensively from an eBay seller (where else?)

These connectors are much easier to work with than the mini-DIN connectors I have recently been using rather a lot. The pin numbers are clearly visible, but it’s a good job I checked: in the connector I had the pins had been installed in the metal socket offset by one pin position so pin 1 was labelled pin 7 etc! This could easily have been confusing and so my brain cells got a bit more exercise than expected making sure I got the connections right.

I changed the microphone configuration in the menu to use the rear mic socket and so my microphone is now plugged in round the back. It would be interesting to know whether any other K3 users have had problems with this front panel socket. Once, I would have posted about it on the Elecraft email reflector, but that would only result in several replies from kool-aid drinkers saying that it hasn’t happened to them so it must be my fault.