10 September 2014 | by Andrew MØNRD  |  Share |  Tweet |  Leave a Comment (0)
As I suspected the microphone amplifier Q1 in the Kenwood/Trio TR9500 was indeed faulty. The replacement arrived next day and within an hour I had successfully soldered in the new 2SC2240 transistor and it now had audio on transmit.

Transmitting into a dummy load and monitoring on my FT857-D the FM transmission was fine, the SSB was okay, perhaps slightly over driven. I suspected that maybe the previous owner might have twiddled something to compensate for a failing Q1.

In the adjustments section of the service manual VR6 on the IF unit controls the SSB MIC gain. To check the settings it was a case of setting the transmitter to 432MHz and putting an audio frequency signals of 1.5kHz of amplitude 1mV and 10mV from my signal generator on to the microphone terminal, and observing the RF power output, which were the 5W and just over 10W as required. As this didn't need altering I left it alone and boxed it back up and returned it to the happy owner.

Last night was the RSGB 432MHz UKAC Contest and I was hoping to here it on the air, sadly I didn't. It now transpires that there maybe another issue with it, something I should have spotted.

I do remember something strange when doing the initial testing. Connected to a dummy load and in SSB mode the S-meter showed S9+ when in receive but with no audio, turning the RF gain control the meter dropped to S0 and normal white noise static could be heard. It received a SSB transmission from the FT857-D with no issue so I thought no more of it. Being over eager and not experienced with using different rigs I had mistakenly dismissed it and should really have read the operating manual more extensively.

Obviously the rigs owner had put the RF gain back to maximum and was now reporting it wasn't switching back to receive. In fact it is but nothing is being heard. Checking the service manual this morning and it appears there is an issue with the AGC circuit (description and block diagram below) 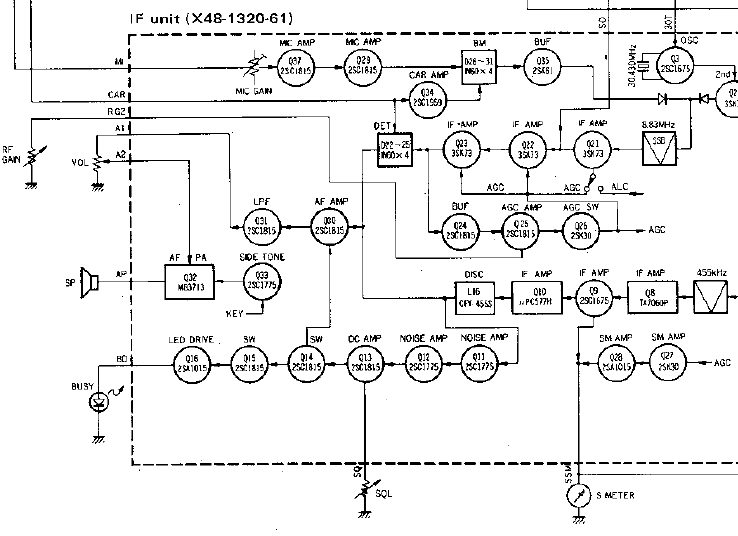 RECEIVER CIRCUIT
.... The signal is picked up from the last stage of the IF amplifier (Q23), then detected and amplified to generate the AGC voltage. The AGC time constant is automatically set according to the mode : FAST for CW; SLOW for SSB. The AGC voltage is applied to IF amplifiers Q21, Q22 and Q23 (3SK73(GR)) and RF amplifier Q51. It is also used to drive the S meter.

It seems the rig may well find itself back on the bench, however this repair could be more problematic!

As I mentioned it was the 432MHz UKAC last night and I had a decent night of search and pounce. Conditions were very strange, lots of fading and strangely some of the usual local operators were not heard. I was very pleased to catch some lift and made a couple of decent DX contacts in Northern Ireland, The Isle of Man, Northumberland as well as Essex and Cambridge.

Who needs a preamp on 432MHz with ears as good as mine? Well actually I do desperately! #ukac pic.twitter.com/WXnMBGY0uw
— Andrew Garratt (@nerdsville) September 9, 2014

In a few weekends it is the National Hamfest, which is held in my home town and I hoping to pick up some bargain gear to improve my UHF set up, however from past experience that may prove difficult.
Andrew Garratt, MØNRD, is a regular contributor to AmateurRadio.com and writes from East Midlands, England. Contact him at [email protected]ail.com.