5 September 2014 | by Andrew MØNRD  |  Share |  Tweet |  Leave a Comment (1)
A fellow SKARS club member picked up a nice condition Kenwood/Trio TR9500 70cm all-mode transceiver (circa 1980) from the Hamfest last year for not a lot of money and he hoped to use it for the UKAC contests unfortunately it proved to be faulty.

From the description of the fault and studying a downloaded service manual I suspected a relatively simple fault and saw an opportunity to acquire it and offered to buy it for the price he had paid. However I have decided to be more charitable rather than mercenary and have offered to give it a look over and repair it for him if I can.

The fault as described was the rig receives okay but on transmit there was a carrier on FM with no audio and a very quiet SSB signal. A faulty microphone had been ruled out and someone had suggested a bad connection internally. Due to the compactness of the unit and the difficulty in dismantling no one had felt confident to attempt any further inspection. I wasn't so sure this was the issue so at the last meeting I picked up the rig and currently have it on the workbench. 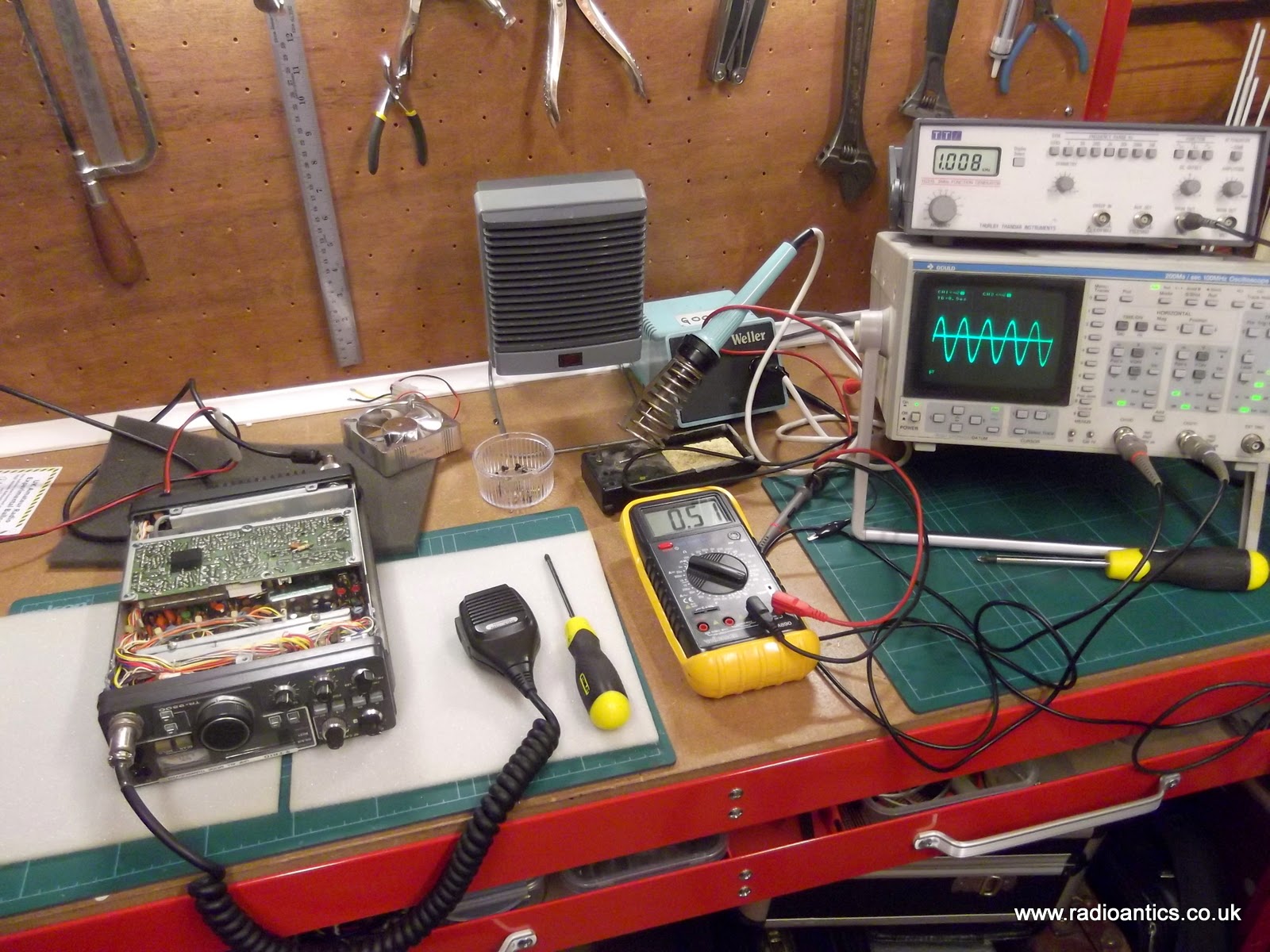 TRANSMITTER CIRCUIT
The microphone signal is amplified with the microphone amplifier Q1 (2SC2240(GR)), which is commonly used for both SSB and FM transmission modes and is incorporated in the carrier unit (X50-1720-XX). The amplified signal is then fed to both the SSB and FM circuits.

Looking at the block diagram of the carrier unit and the above functional description in the service manual I suspected the microphone amplifier Q1 to be faulty.

I want to confirm the fault first and so I connected up a dummy load and RF power meter and using the FUNCube Dongle SDR I could observe and monitor the output signal. Sure enough on FM there was a nice carrier at 10W with very faint audio, on SSB there was a small visible signal again with very little modulation. Whistling, blowing and tapping of the microphone could be seen on the waterfall... just!

I connected a switch to the Morse key input and confirmed the rig transmitted in CW with no issue. 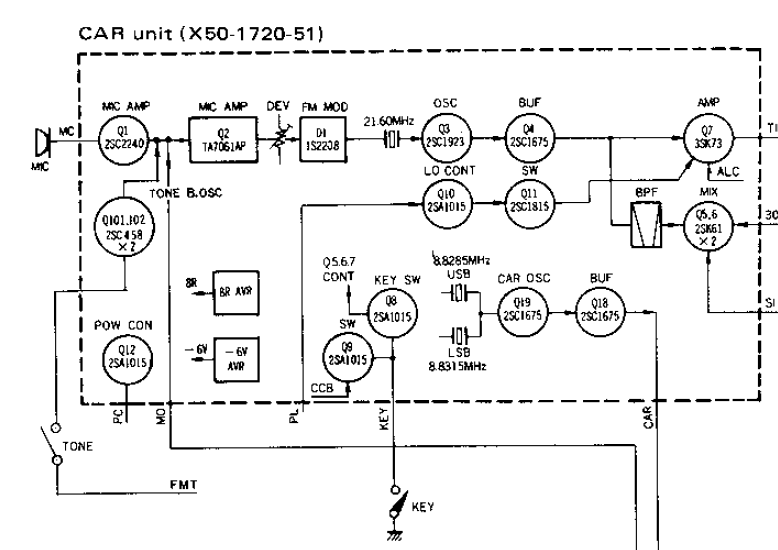 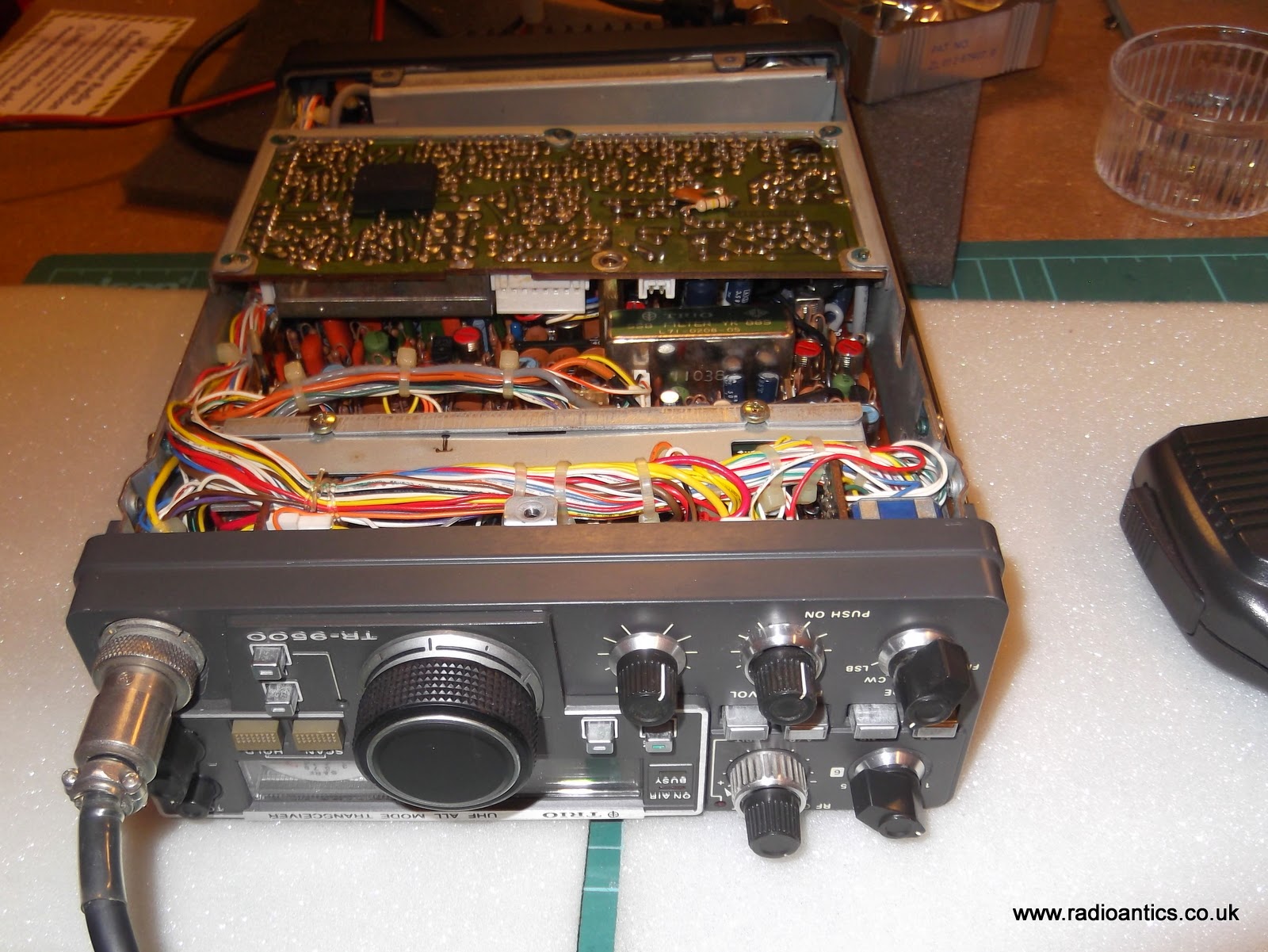 To get to the carrier unit PCB it was a simple matter of removing the bottom cover. The PCB is held in a metal frame mounted with five screws and can be lifted out, as pictured above. But before I did that I checked the continuity to the microphone socket and the 8V supply to the amplifier circuit and both were fine (see diagram below) 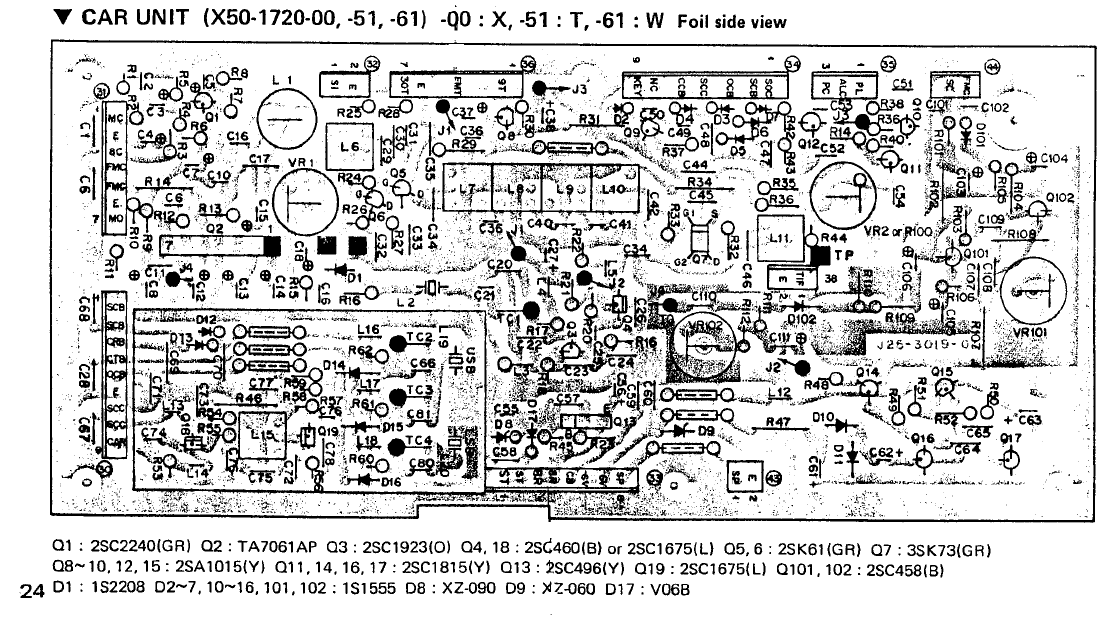 The poor quality image from the scanned service manual shows the bottom of the carrier unit, this is the side of the PCB visible without needing to remove it. The microphone connector is in the top left, putting an oscilloscope on the microphone input (pin1) a signal was observed, however the output (pin8) had an almost identical signal with little or no amplification. Injecting a low level audio signal from the a generator on this pin could be seen and heard in the transmitted signal. This observation together with the tone burst seemed to confirm the other audio circuitry was functioning normally and the microphone amp wasn't.

Actually removing the carrier unit PCB proved a bit tricky as it has a number of small and very secure connectors with ageing and delicate wiring, but I did manage to extricate it and a visual inspection didn't show up any obvious issues such as broken tracks or joints. 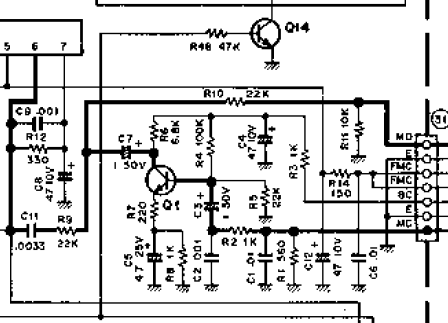 This is the detail of the microphone amplifier section from the schematic. Using a meter I have checked the continuity of tracks and have checked all the resistors for shorts or open circuits and they all read the correct values. The capacitors all look okay and checking the signals either side of C3 the C7 coupling capacitors show they are functioning correctly. This left Q1 a 2SC2240(GR) transistor as the likely culprit and I have ordered a replacement which should arrive in the next few days. I am hoping this will make it spring back to life.
Andrew Garratt, MØNRD, is a regular contributor to AmateurRadio.com and writes from East Midlands, England. Contact him at [email protected].

One Response to “Repairing a Kenwood TR9500, Part1 – The Diagnosis”