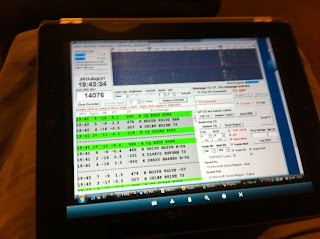 Recovering from a heavy cold and cough yesterday and because there was apparently nothing doing on 50MHz, I thought it was about time I got the HF JT65A gear going again, which I did and made some
enjoyable QSOs on 14MHz.

I’d wondered from time to time about making remote control QSOs. I use the Logmein client to control my PC if I’m out and about and just recently, I’d noticed that their iPad/iPhone client was free for the basic service. Since for datamodes, I didn’t need anything more than screen control – no need to ‘pipe’ audio, this should work just fine.

So last night, I sat on the sofa downstairs, with my iPad and tried to control the PC running JT65-HF. It seemed to work just fine. It felt odd calling someone without being in front of the radio and being able to tweak the power/alc settings and of course to be able to hear signals! However, I made the leap of faith and R2DX was my first ever remote control QSO. I followed on with AB1J and a German station.

I also have the Logmein client on my iPhone, so this lunchtime, I tried the same type of experiments across the Internet from the office. Although broadly successful, there was too much latency, and though I could see signals being decoded and press the appropriate buttons – the timing didn’t always work out correctly. Apologies to Harald DL8ZBA who must have wondered what was happening when I calleed him!

Nevertheless, this looks quite promising, particularly around the house and perhaps further afield when there is a good network connection.