Having been off work today with a stupid cold, I’d been doing a little reading around. I was enthused reading Roger G3XBM’s ever-interesting blog about the experiments that he is making at optical frequencies with 481THz experiments using LEDs. I remembered I’d had a QSO with Gordon G8PNN last year when he mentioned these experiments. Fascinating stuff!

What intrigued me is that these experiments have been going on for a while and that Australian amateurs have quite a history of experimentation in the field. I found and enjoyed ‘Optical Communication for the Amateur’ written by Chris Long in 1979 and later revised. Back in the UK, Eddie G0EHV has an interesting page on the optical experiments in the North East of England.

I wondered whether Dave WW2R/G4FRE had done any optical experiments. It turns out that he hasn’t, but his website contains details of some fascinating ‘First’ UK QSOs on 134GHz and 142GHz which I think you will also find fascinating. 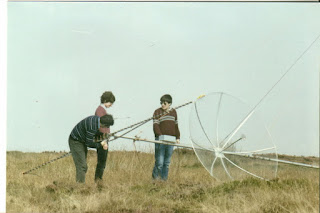 Oh and the picture? I took it off Dave’s website (Dave, I hope you don’t mind!). It shows a very youthful G4VXE in the middle (doing nothing, apparently), Kelvin GW4TTU to the left and Dave G4FRE on the right. We were on Mynydd Maen in South Wales preparing for a microwave contest. I’m guessing 1986 or 1987.