A few weeks ago, I overhead a QSO talking about using a Raspberry Pi and a DVAP as a hotspot for DSTAR. Like a lot of things, it lodged in my brain, but I didn’t do anything about it immediately! 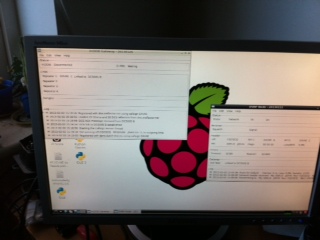 Googling around a little, I found lots of references, but the best suggestion seemed to be to join the pcrepeatercontroller group on Yahoo groups, where there was some good documentation on how to go about it in the Files/Documentation folder.

It turns around that thanks to the hard work of Mark, WD9JEN, Dave, K9RUF and Brian GW6WTK as well, of course, as the software author Jonathan G4KLX, the process is quite easy.

I got a new SD card (actually there was a slight false start as I discovered that not all SD cards work well in the Raspberry Pi). I downloaded the image for the Raspberry Pi of the operating system, Debian, with ircDDBGateway and DVAPNode already installed. You can download it from this link

Most of the instructions I read about copying the image to the SD card talk about using Win32diskimager, however, I could not get it to work with my internal SD card reader on the Dell laptop. I used a utility called Flashnul which worked fine. If you run into the same issues, you can grab Flashnul here

Once the image was written, I checked to see if I could boot the Pi with it and was delighted to find that I could. Following that, it was just a question of following WD9JEN’s instructions and substituting my call for his. I did a slight false start and found that though the DVAP node software was working alright, it wouldn’t link to anything. I discovered that I had inadvertantly entered a password in the ircDDB tab in ircDDBGateway. I removed that and it all started working.

My Raspberry Pi’s network connection is via WiFi but this seems fine and adequate for connectivity, though perhaps it would be even more reliable to take a cable directly to the router.

I have enjoyed some nice QSOs this afternoon, with Peter G0BZX, Dave M0NEY, Ian 2E0VTM (also experimenting with a Pi and a DVAP) and Bob MW0RBL.

Since I can leave the hotspot running without tying up the main computer, perhaps this will result in a few more DSTAR QSOs being made!