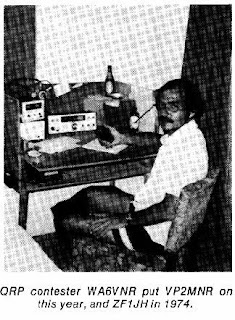 I’m curious if RadioSport Clubs through the 70s had an important role in local event activity and technological innovation? The Potomac Valley Radio Club (PVRC) and the Frankford Radio Club (FRC) fiercely competed against each other for the top slot in the Club Box according to Brockman and Cox (1977).

I arrive at my bullet point that clubs have a significant role in the hobby in terms of motivating activity in addition to promoting the advancement of radio as an art.

I submit RadioSport clubs and modest stations significantly contribute to the overall success of the game. A club has enough resources to generate interest and execute that interest into activity. Whereas modest station operators even when competing for a personal best score are more than willing to go an extra mile when contributing to the success of one’s club.

There are variations to this theme and clubs could harness attitude in addition to willingness of modest stations in terms of activity. One may consider inter club competitions while promoting success through its newsletter and/or website.

For example, why not publish with photograph and narrative, the top three modest station winners?

The photograph of WA6NVR operating VP2MNR really defined the meaningfulness of a modest station in the game of RadioSport; simple yet effective.