Propagation on 10m today is as good as I can remember. I made a few nice contacts using SSB including Japan, India and Bahrain. I heard several Chinese stations as well but have yet to work one. 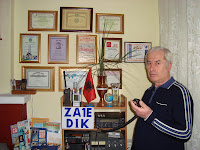 Not really DX but a new country for me was Albania, in the shape of Dik, ZA1E. Decades ago as a teenaged short wave listener I remember hearing Radio Tirana, a huge signal on 7.065MHz, smack in the middle of the 40m phone band. I wonder whether anyone ever listened to its broadcasts? They were pure anti-capitalist tirades read by a woman announcer who sounded like she had a beard and no sense of humour. They actually used phrases like “capitalist running dogs” if I remember correctly. At least Radio Moscow tried to make life on the other side of the iron curtain sound attractive.

I don’t think there was any ham radio activity in communist Albania and there still aren’t all that many hams there now so I was pleased to work Dik for a new one.

One Response to “Radio Tirana”