Radio Amateur Volunteers to Save LORAN 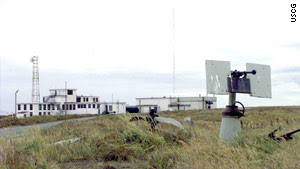 Earlier this week President Obama announced that the aging LORAN navigation system would be deactivated, saving the U.S. $190 million over the next five years. Radio amateurs were vocal in their opposition to the deactivation, claiming that the antiquated system was a good backup if GPS failed.
This morning President Obama reversed the decision, calling upon amateur radio volunteers to assist in the situation. "Today we ask radio amateurs, also known as 'hams' to help save the LORAN system. Hams came to the aid of their country in World War II, providing over 30,000 radio operators. Today we are asking for 500 amateur radio volunteers to run the system over the next five years."

Details were sketchy at the press conference, however a press release later in the day stated that volunteers would receive only room and board in LORAN station facilities, and the program would save a half billion dollars over the next 20 years. FCC Chairman Julius Genachowski applauded the decision noting that radio hams are known for their technical astuteness with antiquated systems and World War II technology, and were likely the best qualified to keep the obsolete system running for decades to come.

Senate Republicans who several days ago were critical of the administration for making a "foolish decision" to deactivate LORAN which would "compromise national security" released a statement in response to today's reversal calling the decision to keep LORAN running "another example of reckless spending that will increase the deficit and threaten freedom", vowing to block all attempts to keep the system running.
ARRL officials were excited over the decision, announcing that all hams who volunteered at the LORAN stations could append a /L to their callsigns, in celebration of the saving of the LORAN network.
Reaction to the program to save LORAN on amateur radio forums and on the air was mixed with many questioning whether CW proficiency would be required of volunteers in order to insure that only technically qualified individuals would be operating the LORAN transmitters.