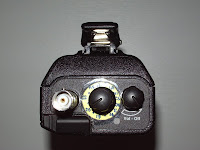 Not much happening today. I have been WSPRing on 10m with 5W but heard nothing and have been spotted just once – by OY1OF on the Faroe Islands.

Yesterday evening I was receiving EA4SG in Spain but he was running 20W. I upped my power to a similar level, and was spotted by G0HNW and M1AVV in the early evening. I left the system running all evening but after it was dark I noticed my neighbour’s security lights were coming on at the start of my WSPR transmissions. Not good when you are trying to maintain a “stealth” station!

Before I started with WSPR today I got out the old DOS laptop and the Motorola programming software to make a few changes to my GP300 configuration. I reduced the squelch threshold slightly, reduced the power from 6W to 5W which should help the battery endurance more than it will affect reception of my signals, and I programmed the radio for 16 channels.

Now there are 16 channels it’s difficult to remember what they all are so I made a paper scale to go under the tuning knob which shows the 2m channel numbers or repeater calls. I had to use the magnifying headset to do the very small lettering and I can only read the scale with my reading glasses on – which I don’t when I’m out and about. But I couldn’t read the channel numbers on the original dial scale either so I’m not actually any worse off. I used to have great eyesight – this is what happens after spending most of your life in front of a computer!