If you’ve been reading the blog for a while, you’ll know that I have been keen to get going on the VHF datamodes, particularly the WSJT modes. I’d been thwarted up until now by the lack of an interface and I’d been reluctant to part with money until I could verify that things ought to work ok! I’d had some bad experiences with the FT-847 and interfaces in the past.

The random trigger for getting this sorted out was seeing a tweet from Colin G6AVK on Twitter that he had ordered a ZLP interface for his laptop. I hastily Googled ZLP Electronics and discovered a range of interfaces very competively priced. I e-mailed Neil, G4ZLP to ask his advice about interfacing with the FT-847 and he recommended the Pro Plus interface. On the basis of his advice I placed an order.

Two days later it arrived, well packaged. Getting the FT-847 setup proved very simple indeed – although I’d had a bit of fun and games getting the levels right from the Pro Plus interface to my FT1000MP. However, it was the VHF/UHF rig that I really wanted to interface with.

Armed with the interface and the WSJT software, I popped onto the ON4KST chat server to see if anyone was around to try a JT6M test with. Although I only have the vertical up, I thought it would probably yield some results. And so it proved, as I was quickly able to exchange signals with Pat, EI8IQ on 50MHz although the reflections ran out before we could complete a ‘proper’ QSO.

Yesterday evening, I set the receiver running on 144.370 with the FSK441 decoder going and I was pleased to decode a meteor burst from Martin OK1UGA. I shall be keen to try and work him sometime soon. 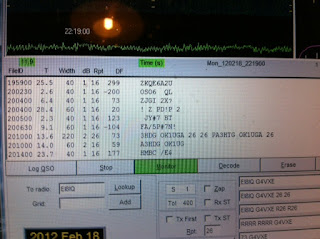 Will 50W from the FT-847 be enough? I have a 4CX350A amplifier here, but I’m sort of trying to avoid using it! And I wonder if I can make some JT6M QSOs with the vertical, or will I have to try and erect a dipole or a low beam? It’ll be fun finding out!