I haven’t been a Fox in a couple of years now. But in going through the logs that our current crew of Foxes have been posting after the hunts, I am seeing a lot of new calls compared to the logs that I had posted in the past.

Now this could mean one of two things:

1) Guys are changing their calls through the Vanity system, or:
2) We’re attracting a nice group of newer hounds.

I think it’s the latter and that’s a really good thing to see. The news of how fun this is, is getting out to people just getting into QRP. And as a bonus, I am still seeing a lot of the familiar calls that you would expect to see, so obviously retention is high.  Just goes to show how addictive that QRP Fox hunting can be.

If you’re a QRPer and you’ve never tried this before, you are in for a world of fun.  The entire concept and the rules can be found here:  http://www.qrpfoxhunt.org/

It’s not hard and there’s nothing to be afraid of – it’s all about a bunch of wacky QRPers getting onto the air and causing our own, friendly melee’.  Nobody bites and nobody gets hurt – even the Foxes. (For the PETA crowd – NO actual Foxes were hurt or killed in the process of the QRP Fox Hunts!) About the only bad thing that can happen is getting your ears blown out by a strong signal; but if you keep your AGC on … 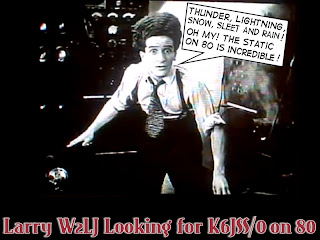 then nobody gets hurt.

So ….. what are the benefits of participating in “The Hunts”?

A) You get to know your equipment better.  The ins and out of it – what works and what doesn’t.  Pardon the over done cliche’, but you really do “become one with your rig”.
B) You get schooled in several virtues – patience, humility, persistence being among them.
C) You have fun
D) You learn the proper way to operate in a pileup (as well as the NOT proper ways) – and if you choose to volunteer to be a Fox, you learn this from BOTH sides, in a microcosm sort of way.  I really have to attribute the experience I gained through the Fox hunts as a major help in allowing me to successfully navigate several DXpedition pileups with only QRP power.
E) You have fun.
F) You learn about propagation and your antennas and what works compared to what you THOUGHT would work.  You learn that conventional wisdom isn’t always so …… conventional.
G) You have fun.
H) You can make some really great, long lasting friendships with some outstanding folks – who you might never meet face to face.  But these friendships can end up becoming your most valued ones.

Did I mention that you have fun?

Now a thought had come to me – a question really …….

I know the QRP Fox Hunts were the brainchild of Chuck Adams K7QO – I was actually there, in the beginning, participating as N2ELW.  But has this caught on in other countries besides here?  I don’t see it mentioned on any of the major QRP e-mail lists and I know there are a ton of you dedicated QRPers out there that read this blog that are not from this side of The Pond.  Is there a European or UK or other (Russian, VU ……. ) version of this going on?  If there’s not, there should be!  It’s so much fun and in addition to that, the friendships that are forged because of the hunts are just priceless.  Heck, the friendships made are more valuable than the hunts themselves!

All that said – the QRP Fox Hunt Committee, the Foxes, and yes, even the Hounds do such a great job, keeping this fun (there’s THAT word again) and exciting. A big tip o’ the hat and a hearty “Thank You” to all of them.