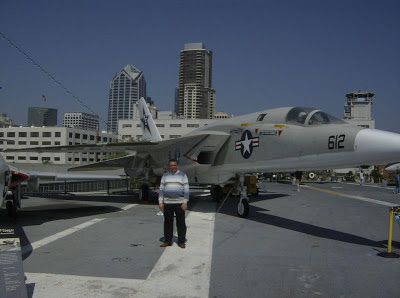 Last night I had a tremendous amount of “fun” on the radio. It first started out with working a new station in Belarus.  Andy (EU7A) was an easy catch on 17 meters. I enjoyed this picture of him standing on the flight deck of the USS Midway in San Diego California. I actually participated in operations with this “bird farm” when I was in the Navy. He had a great signal into West Virginia.
We had strong storms early last night. I needed to shut down the radio because of lightening in our area. I turned in, as usual, around midnight, and soon afterwards, as usual, I arose due to leg pain. The storms had passed, so I tuned into the 30 meter band.
This is when and where I had all my fun.
I’ve been using the QRZCQ.com cluster for several weeks now. (link on the right side of this blog) I like the way they arrange their information, and I like the additional resources on their site. I also like the ability to “post my spots” and their linking capabilities to many other DX clusters all over the world. You make a post here, and the rest of the world knows about it, in just a few minutes.
The thing that was so much fun last night was my ability to be the first to “spot” some good stations in the Netherlands and England. I must admit, I like to do this, and above all, I like to post my “QRP @ 3W” designation in the remarks section.
The especially rewarding, and fun thing about last nights postings; were the responses from other stations around the world. So after I made the “first” posting of EA6NB in the Balearic Islands of Spain, I saw a Colorado station post the same spot and frequency and also “worked with 3 watts”.
I’m encouraged by this!
I usually post my QRP activity on “QRP Spots” (link of the right side of this blog) with the hopes of other QRP operators (mostly here in the United States) being able to work these stations; but the QRZCQ site is “world wide”.
Before turning in for the night, I also worked, and “first” spotted PA4VHF and PA0LEG in the Netherlands. Soon afterwards, I had a nice (and also “first” spot) “QSO” with G0NXA in England. This was a QSO–we exchanged information about our radios, antennas, power, and the cities where we lived. He was amazed at my 3 watt signal from Charleston, WV. He was very congratulatory and very interested in my station.  hihi
Just before I shut down last night, I was amused to see a New Zealand station place “worked with 10 watts” in his “remarks section” for a contact into England. I hope this continues a trend which makes more amateur radio operators realize just how easy it is to work the world with only a few watts of power.
Today marks my 136th day of working at least one DX station per day with less than five watts of power. With the exception of taking a little “time off” for family gatherings in New York and North Carolina, I’ve worked a DX station, every day, since the first of the year. (2013).
John Smithson, Jr., N8ZYA, is a regular contributor to AmateurRadio.com and writes from West Virginia, USA. Contact him at [email protected].