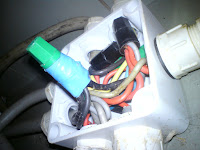 Remember that QRN I had a year ago. It suddenly disappeared after a few days. I never found the real troublemaker but suspected it came from the house or from nearby. Now since we are going to build a new bathroom next week, I had to rebuilt part of the house and wiring I came accross some mains wiring above the ceiling that probabely caused this QRN. When I opened a junction box and touched the wire nuts lights went on and off. Actually all connections were very poor made and the last owner of the house apparently tried to stick everything together with tape, besides that he probabely was colorblind. I removed all nuts and made new connections with new connectors no nuts again. As a result of that blindness wires were switched, I noticed a short circuit at first after reconnecting I thought. But in the end it seems the safety earth was used as switch wire, so it became a life wire as well. That was a 2 weeks ago, in the mean time I did a rebuilt and rewiring, that junction box has been removed together with a lot of other junk. I already made some preparations for the new radioshack and of course for the new bathroom and finally switched over to the new wiring last Sunday. Unfortenately I think other wiring in the house is just the same mess as this, although that wiring is from a earlier date I think around 1950-1960. I already removed parts of it when building the baby room last year and found some nice porcelain wire nuts at one of the old junction boxes. They are originally from the first mains wiring when the house was built, great to find such items in our 1935 house. Well despite a lack of time I’ve tried some radio as well looking for T32C in the evening, reading other blogs it seems they are easy to work from North America. But although I saw a lot of dx cluster spots on 20, 15, 12 and 10m from stations in Europe and even from the Netherlands I could not even hear a whisper from them. So I guess to work them you really need a beam from this part of the world, or I’m just not lucky? If time allows I’ll try again next few days till the DXpedition is over. 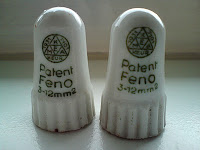