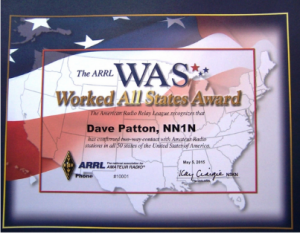 Operating goals or awards are a fun way to keep focused on accomplishing something via ham radio. Really, it’s a specific reason to get on the air and make radio contacts. I am not big on idle chit chat via the radio (“the weather here is 65 deg and raining”) so having a reason to make contacts helps me get on the air. I’ve tended to pursue awards in a serial manner…once I hit some level of accomplishment, I usually declare victory and move on to something else.

Way back in the wayback machine, the first award I pursued was Worked All States (WAS). It does take some effort but I was pretty active on the HF bands at the time, so many of the states just showed up in my log. But to really drive it home, I kept track of which states I still needed and actively looked for opportunities to work them.

Next up was Worked All Continents (WAC), which obviously requires working some DX. But then I decided that if I was going to have any DX cred at all, I needed to get DX Century Club (DXCC). This turned out to be a bit of a challenge with my modest station (100 watts and a dipole) but I found that working DX contests to be very helpful. The big hassle was collecting the QSL cards and getting them checked by the ARRL (back before the Logbook of the World days). Once I checked the box on DXCC at just over 100 countries, I was satisfied and went on to other things. Serious DXers chase all available countries/entities to get Honor Roll and other bragging rights.

The VHF and higher bands have always been a passion for me, so I pursued the VHF/UHF Century Club (VUCC) awards. First, it was 6 meter VUCC, the easiest one to get. A really good run during the ARRL June VHF contest can produce the 100 grids you need for the award in one weekend. For me, it took a few more contests than that after factoring in the fallout that occurs when trying to get confirmation QSLs. The 10 GHz VUCC only requires 5 grids which turned out to be not too difficult. My VHF collaborator at the time, Doug W0AH (now W4LY) and I took turns operating from Pikes Peak while the other guy went out and activated the required 5 grids. It helps to have a big honkin’ mountain nearby to use for 10 GHz operating. About this time, I got into working the LEO satellites and worked the required 100 grids for satellite VUCC. I don’t have very many grids confirmed on 2 meters, so that one is still calling to me.

Recently, I spent some effort going for the CQ WPX Award (worked prefixes award). This is an intriguing award structure because every new callsign prefix counts as a new one. For the basic mixed-mode award, you need to work at least 400 different callsign prefixes. I found this format to be a lot of fun because “everyone is DX” so to speak, but DX prefixes are also very valuable. The same approach is used for the WPX contests, which naturally brings out stations with less common callsign prefixes. A big motivator for me was when the ARRL announced Logbook of the World (LoTW) support for the CQ WPX awards. I mean, there was no way I was going to collect 400 QSL cards to submit for this award, but using LoTW made this very efficient. More on that story here: CQ WPX, LoTW and the End of QSL Cards.

Summits On The Air

Lately, I’ve been active in the Summits On The Air (SOTA) program, both activating and chasing summits. This is a natural fit for me as I’ve enjoyed mountaintop operating in various forms, mostly on VHF and UHF. (See my SOTA blog postings.) The SOTA program has a wide variety of awards, supported by a very powerful database used to record SOTA radio contacts and keep track of the scores. It is not really a competition but there is friendly rivalry between SOTA enthusiasts as they monitor each other’s posted scores.

I’ve been using VHF (and UHF) exclusively for SOTA and managed to qualify for the Shack Sloth Award using just those bands. (Shack Sloth is achieved with 1000 chaser points.) Shack Sloth is a bit of a misnomer for me as many of my SOTA chasing contacts were done while hiking, mobile or portable (not sitting at home in a shack). The Mountain Goat Award is taking a bit longer because I have to drag myself up enough summits to reach 1000 points as a summit activator.

Here’s the current scores for the Colorado (W0C) SOTA activators:

At the top of the list, we find Carey KX0R totally killing it with 2808 points. These folks have all reached the coveted Mountain Goat status: KX0R, K0MOS, K0JQZ, W0CCA, KC0YQF, W0CP, KC5CW.  I am further down the list, tied with AD0KE at 302 points. Now, remember this is not a competition

Honestly, I wish I were further along the path to Mountain Goat but I’ve decided to keep at it and enjoy the journey. Walt W0CP recently gave me some excellent advice: just keep making progress.

You may not find the awards and goals I’ve mentioned to be very interesting, but there are many other options. In 2016, the ARRL sponsored the National Parks On The Air (NPOTA) program, which created a lot of interest and activity. I did just three activations for NPOTA but many people really got into it.

You might also set your own personal goal, not associated with any award. I know one ham that decided his goal was to make a ham radio contact every day of the entire year. This sounds simple but if you have a full-time job and other responsibilities, it takes some persistence to make this happen. Perhaps you are public service oriented; you might set a goal for the number of ARES events you support this year. I challenge you to think about what it is you are trying to do with ham radio and set a goal that is consistent with that.

Those are my thoughts, what do you think?