Anyone who knows me well may be slightly taken aback to find me writing about QSL cards! Each to their own, but it’s a part of the hobby that really doesn’t appeal to me at all. However, I’ve always said that I think it’s nice to be able to QSL contacts which are special to you in some way.

And so it was, I felt, the other day when I worked Berend, PA3ARK on FO-29. Berend often inspires me to try something new and so I thought it might be nice to try and create a QSL to commemorate the QSO.

The program is free to download and I found it well-designed and easy to use. I did have to install the Microsoft .Net framework 4.5.1 and install it on my PC before I could install the software.

I was able to import a background image of a photo of our village church to use. I really had wanted to try and use one of the aerial photographs I took of the village when I flew over in G3WGV’s aircraft a couple of years back. However, I found the colours didn’t really lend themselves to overlaying text on top of the photo. Actually, I’m sure a more artistically gifted person would have managed, but I opted for the easy approach – one where I had a nice blue sky, where I could place most of the text.

I found that I was able to setup various static text fields and create a QSOs box, which could be populated  from an ADIF file from my logger.

After a bit of resizing and trying various options, I was ready to import my ADIF records. I did tweak the Mode field in the ADIF record, so that I could show that the QSO took place on a satellite. The logger, of course, records that I was (in this case) transmitting on 144MHz, but not that it was a satellite QSO. I wanted this to be clear, so I amended the Mode field in the ADIF field to say CW Via FO-29, which I thought was clearer. 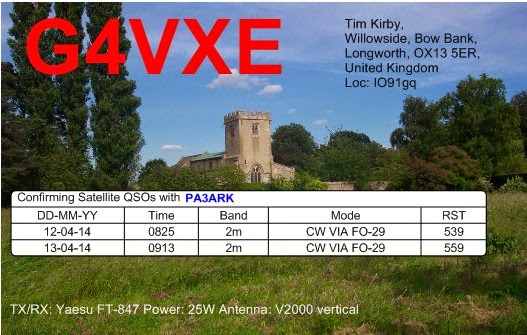 Here’s what it produced, which I am quite pleased with. Of course, it looks much better on screen than on my slightly dodgy printer, which is normally just used for printing text. Nothing to stop me putting it onto a USB stick, though and taking it into the local photo printing establishment before popping into the post to Berend!
Tim Kirby, G4VXE, is a regular contributor to AmateurRadio.com and writes from Oxfordshire, England. Contact him at [email protected].

2 Responses to “Printing your own QSL cards using HAMQSLer”