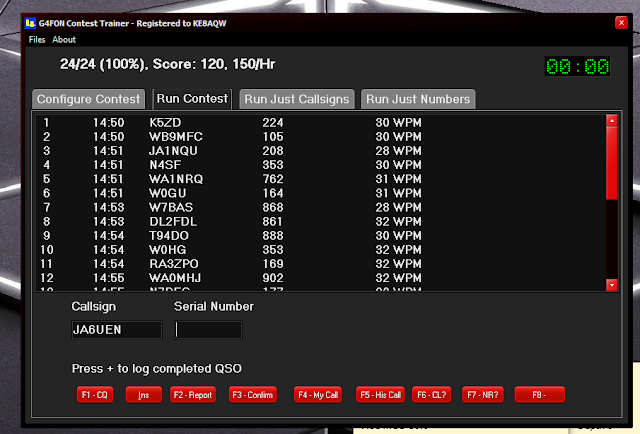 Moving along with my contest code...I call it contest code as it's really not conversation code as that takes a bit more skill. Not saying that contest code does not take skill but you kinda have an idea with contest code what to expect.........a call sign, a number or in some instances a name. Conversational code is more whatever the heck you both are going to talk about. Now mind you the RST, name, QTH and WX are kinda standard it's when the op deviates from the plan and gets going on about the vacation his family took in your hometown.......I digress.

I have been trying to build on my contest CW speed, accuracy and most of all confidence. I have been doing that with these programs G4FON cw traner, RufzXP, Morse Runner and LCWO code practice programs. What I have found is you have good days and you have not-so-good days. There was a practice session when I would hear the code and freeze wondering for some crazy reason what that letter was. Then the mixing up of letters on the keyboard, going to a "G" but end up typing an "H". Oh and then a big confidence builder is when the contest program send you "SH5IH"

The most recent issue I was having was hitting between the letters on the keyboard and gong for letters on the 3rd row up such as "W, T or Y" but hitting the numbers above those letters.  I finally figured out what the issue was. Seems when I was practicing on my Mac laptop the keys are closer together than on my Lenovo keyboard. I was doing twice as much practicing on my Mac laptop and my fingers were trained to only move slightly on the keyboard. This meant issues on the larger Lenovo keyboard. The solution was to bring the Lenovo keyboard to the make and use that.

Anyway today I was thrilled to get zero mistakes on the G4FON CW contest trainer today......I know I know I am all ready for the big ego bubble burst the next session when missing more than I copy. But so goes the contest CW battle. For now, I am bathing in the success!

This weekend is the annual running of the RAC Canada Winter contest and I am entering the CW only category and yes you guessed it I am going to be calling CQ..........unless I see a nice RAC multiplier worth 20 points!!