In the middle of last week, I thought it would be nice to have some time off, climb some hills and sit by some rivers. These sorts of places help me to relax.

Yesterday, I went up White Horse Hill which is located on the Ridgeway and about 10 miles or so south east of Swindon or around 12 miles from here. I took the UV-5R and also the Palstar KH-6 50MHz portable. Sadly nothing was heard on the KH-6. I think without a proper 50MHz antenna it is rather deaf! A few CQ calls on 145MHz didn’t yield any contacts although I heard GB6AFD a special station for Armed Forces Day in Nuneaton, an M6 in Frankley (Birmingham) and a GW6 who was on a hilltop – sadly I couldn’t attract his attention before he packed up and went home! 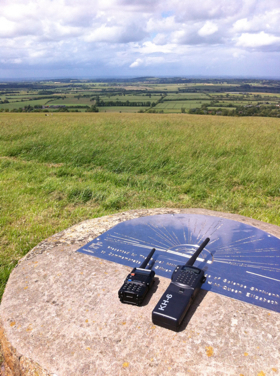 On 433MHz though, I called CQ on 433.500 and was surprised to be called by Stewart G0LGS in Cheltenham. We had a nice QSO although being a blustery day, I could not face the correct direction and avoid wind noise! Once I’d worked Stewart I signed and tuned around a little and came across Des G0RBD in Chippenham. We were able to have a QSO. Des asked if I had my D-STAR radio as he wondered if it would be possible to work. I didn’t have it, but promised that if I had the chance to go up the hill the next day (Sunday) then I would. 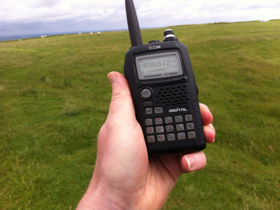 I got my jobs out of the way and set off for the hill around 1115 this morning. As I was driving to the hill, I spoke with Des on GB3TD our local 433MHz repeater. I parked up and started to climb the hill. I quickly heard Des calling CQ on 144.6125 the DSTAR simplex frequency. I responded straight away but he didn’t seem to copy. I was conscious that he was running more power than me, so to get a better signal I needed more height!

Once I had climbed about 30 feet or so, Des started to hear me with some digital breakup (R2D2). We exchanged reports but I kept climbing. As I approached the ramparts of Uffington Castle Des report that my signal was solid with no breakup. Once I got to the very top, Des was end stop and he reported me as S6-7. Signals were good enough that we thought we would try 430MHz. Des called me on 438.6125 the DSTAR simplex frequency. Signals were excellent and perhaps a little stronger than on 144MHz. We then thought we would reduce power. I could hear Des with solid signals with him running the lowest power his IC9100 would go, around 2W and he was able to hear me with just a little R2D2 on the SuperLow setting on the E92.

Fascinating results and we are now keen to try over some longer paths on DSTAR and see what we can do. Thanks Des for the suggestion and a lot of fun!

Before coming down the hill, I tried a CQ on 145.500 FM and was called by Paul G6UAJ in West Swindon. We had an interesting QSO and Paul mentioned that he was returning to the hobby after about a 12 year break. His prime interest is microwaves and in particular 10 and 24GHz. I promised I would try and put him in touch with people active on the higher bands.

A nice couple of portable sessions and it was great to watch the views across the valley and the rainclouds scurrying by to the north.