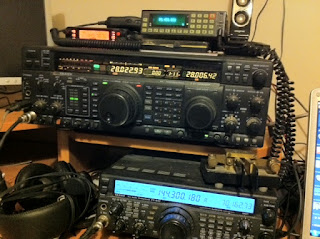 Over the last few months, I didn’t have any HF in the shack other than the Anytone 10m rig. One evening a few weeks ago on Twitter I noticed that Pete 2E0SQL and Mark M0MJH were having a chat on 7MHz SSB. I quickly routed the HF aerial to the back of the FT847 so that I could listen. That worked fine! Then I tried to call them, but discovered that the FT847 wouldn’t transmit in the ‘new’ part of 7MHz.
Well, of course that was just the motivation I needed. I got the FT1000MP out and have installed it. And since then, it’s been nice to make some casual contacts on the various HF bands again. Mostly I’ve been looking at 28MHz with a few nice contacts made around North and South America in the late afternoons and evenings. 14MHz has been quite fun later on in the evening – I’ve been having a quick tune around just before going to bed and have made some nice CW contacts, mostly into the USA. Al, WA7GSK in Idaho was a nice one the other evening.
Of course, I’ve been listening for my friends at T32C, but conditions haven’t been good to that part of the world when I have had a chance to listen.