Pileup on the fells

The hills are alive with the sound of “CQ SOTA” and “CQ WOTA”. These two adventure radio programmes are becoming so popular that anyone trying to make contacts from a hilltop this last weekend on 2m FM had trouble finding a clear frequency. The sight of radio amateurs on mountain summits is becoming so commonplace that soon it will be the ones without radios getting the funny looks. 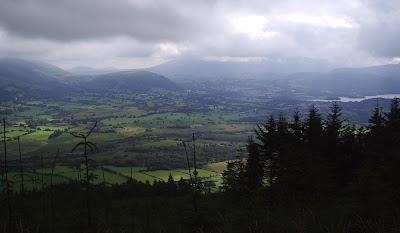 On Sunday morning Olga said to me “You should go for a walk”. Needing no further encouragement, I tossed the VX-8GR and a few bits and pieces into my rucksack and off I went. I parked at Thornthwaite near the old Swan Hotel and made my way up through the forestry roads to the minor summit of Barf. I didn’t go up by the direct path from opposite the Swan as it is very steep and slippery – I came down that way once a few years ago and it was enough for me.

On the way up I had a contact with top Wainwrights activator Phil, G4OBK/P on the summit of Brandreth. Phil is well on his way to completing the challenge of activating all 214 Wainwright summits in the English Lake District within two years and reached the half way mark this weekend. Visit Phil’s Wainwrights blog if you get a chance.

Shortly after contacting Phil I saw two ospreys circling over Bassenthwaite Lake and calling to each other with their high-pitched cry. I stopped and took the picture shown above of the view towards Keswick. About ten minutes later a small red deer came out of the forest about 100m ahead of me and trotted into the distance. Perfect!

It was cool but humid, but the misty weather creates a special atmosphere in the forest that is very pleasant. However once on the top of Barf a drying breeze was experienced. I made another contact with Phil, who was now en route for Great Gable, so he could tick Barf off on his “worked” list, and made another contact with Geoff GM4WHA. I also received an APRS message from Colin 2E0XSD, who unfortunately couldn’t hear me direct due to the amount of rock between us.

I then set off for the higher summit of Lords Seat, which I reached in about half an hour, where I stopped and had my lunch. By then Phil had reached Great Gable so we had a summit-to-summit contact. I made numerous other contacts, including Geoff and Colin and a couple people on SOTA summits outside the Lake District. I received a lot of comments about wind noise in the microphone, despite trying to shield the radio with both hands. The VX-8GR is the only one of my 2m hand-helds not to have a speaker mic, due to the fact that the only option is the expensive original Yaesu version. I should probably carry the VX-8GR just for the APRS and take the Motorola GP300 for voice contacts.

Simon, M3IWN/P called CQ from the top of Scafell Pike in the Lake District, which is England’s highest mountain. He was doing a SOTA activation and had a beam antenna with him. On a clear day I could probably see his summit from where I was, but he had so many callers that after 10 minutes of trying he still hadn’t heard me. I decided to move to another frequency and make some contacts of my own, checking back on Simon’s frequency now and again until eventually he got my call and we had a contact. At the time I worked him Simon had filled two and a half log pages with contacts including several summit to summits.

The QRM up there had to be heard to be believed. I was only using a 2m helical. The VX-8GR receiver tends to die in the presence of strong signals and I have heard strange things when using anything better than the stock antenna. Another reason for taking the Motorola, which has a better receiver. First, though, I will need to reprogram it to cover 145.300MHz, the frequency Phil likes to use on his activations.

Over the weekend I think something like 20 Wainwright summits were activated by around half a dozen different operators. Scafell Pike was actually activated twice on Sunday! Later in the afternoon after Simon had left I saw a spot had been posted for another station on the same summit.

I returned to the car via the forestry roads for a very pleasant walk with a lot of radio fun as well. If you want to join in, come to the English Lake District on a summer weekend – you won’t regret it!