18 April 2015 | by Steve VE7SL  |  Share |  Tweet |  Leave a Comment (0)
If you've wondered why the bands have been so volatile of late, it's because Cycle 24 just won't go away quietly. It seems that for the past several months, our planet has been besieged by one solar bombardment after another. Most of it seems to be coming via Coronal Hole Streams.

This UV image from NASA's Solar Dynamics Observatory satellite clearly shows the large coronal hole presently facing earth. The arrowed vectors represent material spewing from the hole, with much of it earth-bound. The material from this hole is expected to arrive between April 21-22, possibly causing more auroral activity.

Our Sun's latest rotation is showing several new large sunspot groupings, all very capable of unleashing a new round of solar flares and associated disruption ... if nothing else, Cycle 24 is persistent!

Peeks at the geomagnetic activity for April 16th illustrate just how active things have been of late ... making the high HF bands sound like the middle of the night as well as making LF and MW propagation depressing. 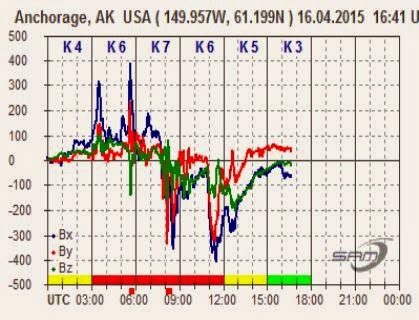 The software gurus at NOAA have been busy once again, this time revamping several of their visual models to an 'animated' mode. The Ovation Auroral map is particularly interesting when run in this mode as it shows the auroral field's activity visually over the past 24 hours. The display gives one a new appreciation for the dynamics of such large scale events:

An auroral event on Thursday evening gave 6m conditions a bit of a kick in the backside on Friday afternoon with signals from southern South America making it into various regions of the U.S. including the PNW, usually left out of such affairs. At one point, CE2AWW was hearing / working both the west coast (W7's) and the east coast (VO1's). Sporadic-e was definitely involved on the west coast end as the band was open to California / Nevada for most of the day.

No one can be certain of what lies ahead for Cycle 24 but it's certainly not going away with a whimper!
Steve McDonald, VE7SL, is a regular contributor to AmateurRadio.com and writes from British Columbia, Canada. Contact him at [email protected].