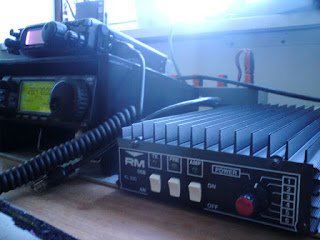 You’re kiddin’ PE4BAS goes QRO. No, it can’t be. But a picture says more then a 1000 words! It has to be true. I just had the opportunity to buy this RM KL500 amplifier very cheap on the club evening last friday. I thought what the heck, I just like to experiment. This amp is rated 600W (!!) out with 30W SSB in. Well I don’t recommend that at all, as it will get very hot. At first I connected everything to my FT817 and did a 5W input, the amp was not going to TX, was it broken? So I was a little angry about that. I wrote one of the clubmembers to get the call from the amateur that had sold it so I could get in contact with him. Then it strikes me that there was a extra connection made on the back side. The electronic diagrams were delivered with it and from that I understood the internal VOX circuit was bridged. I just had to connect this connection to earth or neutral via PTT to get it on TX. After looking inside it was clear to me the extra BIAS mods found on the internet were already made in this amp. Anyway, just to be shure I connected a old CB radio with 3W instead of my expensive FT817. With the KL500 on the dummy it did already 100W out full power. But it took 30A of current already. I don’t want to test it any further as that was more then enough for me. I guess it does about +200W out with 10w in? Too much for my needs. So I will sell this one after I tidy it a little and make a proper connection for the large current supply. After that I will try to test it once more with 10W input and then sell it. 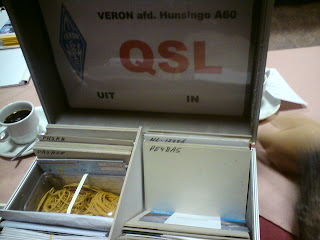 So I’ve been to the local radioclub last friday and collected my QSLs from the bureau. They have a special PE4BAS tab in the QSL trunk now, so they were easy to find. 2 QSLs were special to me. The one from ON2PCO as I remember him well. He was using 10W with a FD4 dipole inside the house and was surprised to work me on 80m in the PACC. And the QSL from JW/PA0ZH from Spitsbergen, Svalbard. I didn’t work them with EME but on 20m SSB. Although they were QRV with EME, I think they made a lot of operators very happy. 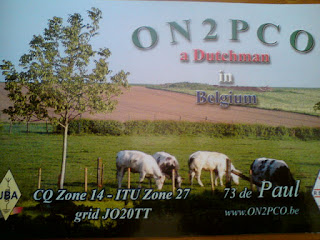 Today I listened for HK0NA once again. I guess luck is not with me as I could only hear a very weak sometimes readable signal on 15m. The rest of Europe seems to have very good propagation as he worked one after the other. Same for TO4M who was just readable on 10m, he worked a lot of Europe but after calling for half a hour I just gave up. I tried for a Brazilian station who was RS58 here, but even he didn’t hear me. Time to leave the radio then and do some other things. I hope propagation will be better with the PACC on……9 days to go.