PART2: Mod for Signalink USB so it can be used with 2 radios

13 February 2016 | by Mike VE9KK  |  Share |  Tweet |  Leave a Comment (6)
Below are some of the options I came up with to see if I could get my Signalink USB to work with two different radios……
So settling on option 4 as my choice I set you to see if and how it could be done. I did an internet search because the way I look at it is why try to reinvent the wheel if someone else already has! My results turned up only 2 that I could find were the unit was being used for 2 radios. Both did not seem to suit my need. The first seemed the operator configured a device that allowed the use of two of the same radiosbut at different locations. Each radio could be controlled by the same Singnalink unit. The other site I found this op used 3 RJ45jacks in a separate box to do just what I wanted to do…BUT…..I was looking to not have yet another “box” I was ultimately looking for an “all in one” solution. I ended up drawing out many possible circuit diagrams and at one point almost finished wiring what I thought was the "solution". I then realized it just was not
going to work and had to hit the drawing board again.  I finally came up with a workable plan that involved drilling only two holes in the back panel of the Signalink. I had to install a ON-NONE-ON mini switch and a hole for an RJ45 pigtail to be placed. Some of the things I ended up learning as I went along were:
1. A long pigtail had to be made on the connections between new rear panel switch and the 8 pin DIN wiring. This allow the removal (if needed) of the circuit board.
2. I had to solder the wires into the 8 pin DIN they just did not stay in place and with the extended pigtail there was lots of movement in the wires as the covers were put in place, I didn't want any wires coming loose once assembled.
3. I ended up removing the pigtail and adding a rubber grommet as the plastic housing seem to have a sharp edge to it.
Below is my diagram for the mod, the "K3 Signalink RJ45" is the internal jack on the unit. The wiring shown in my diagram for this RJ45 is the wiring that is on the circuit board and does not need to be added. Also on the 8 pin DIN there are jumpers between Spk-1, GND-5 and GND-6.  I have tried the unit both with my K3 and KX3 and it works great. The final thing I have to do is just label the rear switch. 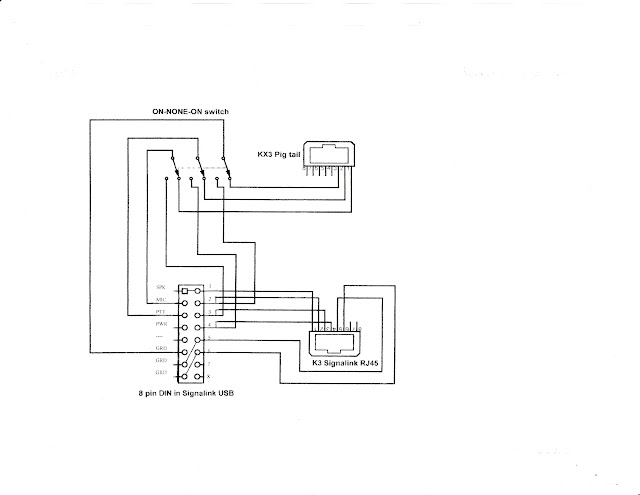 6 Responses to “PART2: Mod for Signalink USB so it can be used with 2 radios”