Parks on the air or POTA 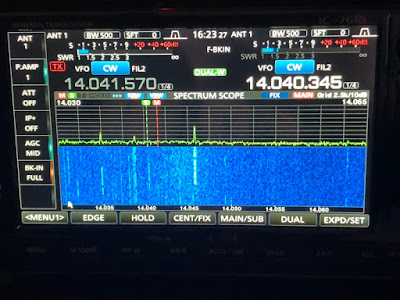 I toddled into the radio room this afternoon and flipped on the radio and most of the time I have my PC on and head over to DX Summit spotting network to see what's happening on the bands.  I did notice right off the bat the RTTY contest was up and going fast and furious. I did notice some spots for POTA (Parks on the air) I headed over on my PC to the POTA website to see how many active POTA stations there were. I found some that were operating CW and I spun the dial to see if I could hear anything. I first tried KD3D he was in Allegany National Forest in the state of PA. He was around 559 coming into me and I gave him a call and was answered on the first call. We made our exchange and he was in the logbook with that I thought I would give a few other POTA stations a go.

I saw K4SWL was spotted and the call rang a bell so I looked him up and he has I blog that I follow and read regularly.  I followed him around as he moved from band to band but I just could not hear him and if I did he was way down in the noise floor. I did hear other stations calling him and sending their reports. I did not want to try a call if I was not able to really hear him.

I then went after AI6ZD who was in California on Bolsa Chica State Beach.....it's -18 C here and just to think here is a ham on the beach in sunny California. Sometimes I feel the U.S/Canada border should have run north to south and not east to west! AI6ZD signal was down at the noise floor but now and then he jumped up to about S5. I hung on for a while and his signal slowly crept up and I was able to make contact and get him in the log.

I then noticed K4SWL was on 80m and I thought that could be my chance to make contact but it was not meant to be for today.

2 Responses to “Parks on the air or POTA”