Optical communications over the horizon 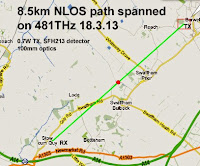 I have been too unwell to do this recently, but not long before my brain bleed (Sept 2013) I was amazed at optical communications over the horizon, non line of sight (NLOS) using clear air scattering.

The inspiration for all my optical experiments came from Stuart Wisher G8CYW who did a great series in RadCom a few years ago.

My home made transmitter only consumed about 0.7W from a red LED bought on the internet. My homemade RX and TX used homemade optics based around cheap drain pipes and cheap magnifying glasses. The whole RX and TX were simple and low cost. Only simple test gear was needed too. It is a bit like microwaves, but easier to build and test.

There was no sign at all of the TX beam in the sky.  All alignment used dead reckoning with some panning at the RX end to find the TX.

Using free PC software and QRSS3 helped as bandwidths as low as 0.37Hz were possible.

When fitter I want to try infra-red LEDs instead.

Roger Lapthorn, G3XBM, is a regular contributor to AmateurRadio.com and writes from Cambridge, England.