It’s the RSGB’s Centenary Year and the callsign G100RSGB has been doing the rounds of the clubs in the UK, a bit like an Olympic torch of the air! Well, this weekend was the turn of the Harwell Amateur Radio Society and they very kindly invited me to come and join in with some operating.

I popped down first thing on Saturday morning. I decided to try some 14MHz CW operation which was modestly busy. G100RSGB is a real pig of a callsign to send on a keyer you don’t know. So, after being very gently chided for sending G1??RSDD I decided that perhaps it would be prudent to find another mode!

We got the 50MHz station setup and although there was no Es around, it was fun working some tropo contacts on the band, including a number of stations setting up for VHF NFD. I was particularly impressed to work DJ6XV and another of the team worked a GM/P. On 144Mhz, Ann found some propagation to the south, working an EA1 portable as well as some French stations down in IN93. 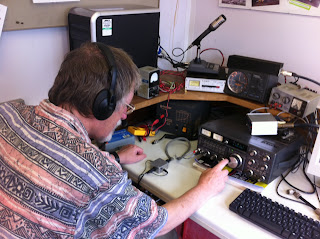 Mike G8CUL gets the G100RSGB station at Harwell ready for some DX!

It was great fun to join in with the celebration and many thanks to the Harwell club for the very kind invitation.

In the afternoon, I made a few 50MHz VHF NFD QSOs, I was particularly pleased to work EI9E/P and GW2OP/P – not bad tropo with my vertical antenna – so definite ‘Golden Ears’ awards for the operators there for pulling me out of the noise.

By chance, later in the afternoon, I noticed that Dave M6RPI had launched another pair of balloons, one of them, once again, carrying Kingsley, the Reading FC mascot. It was fun to track the ascent of the balloon, and noticing the temperature figures reported, showed very clearly that a temperature inversion was going on. One moment the temperature was around -17C and then another 10000m higher and the temperature was just above zero.

It was fascinating to listen to the balloon transmission and for the first time, I was monitoring when the balloon burst. It was quite apparent as the steady signal suddenly started Doppler shifting as the payload fell at around 1km every 15 seconds. Poor Kingsley the lion! But have a look at Dave’s video of the balloon burst and see some stunning video footage

Then today, I was busy writing the PW column which was enjoyable. In odd breaks I made a few QSOs on 70MHz and again was particularly pleased to work GW2OP/P and EI9E/P. I did faintly hear a GM at one stage, but nowhere near workable. Very pleasing on the vertical.

After I’d finished the column and a few household chores, I noticed an FO-29 pass was due. I decided to have a listen and put the Elk antenna together quickly. There seemed to be some FM interference, but it was nice to hear Bob G0FGX coming through nicely. It turns out Bob is close to where my Mum and Dad used to live in Cornwall.

Finally, as I had the Elk hooked up to the FT817, I decided to see what I could hear and work with the Elk, handheld in the back garden on 144MHz in NFD. I was delighted to work GW2OP/P (again) and even more surprised to work MM0CPS/P in IO84. More Golden Ears awards, fellas!

One Response to “Operating G100RSGB, freefalling lions, a few VHF NFD contacts and a satellite SWL!”