Dad and I built a 10-meter rotable dipole some 12-13 years ago using pieces of a large Wilson tribander that I had begged off of a local ham.  It was an interesting mechanical design, using a 3/4-inch CPVC tee fitting as the center insulator and mounting bracket.  The third leg of the tee slipped over a piece of EMT conduit that we had crimped.  The EMT, in turn telescoped into a RadioShack-type TV mast, which was bracketed to our deck.  It was a fun antenna back when 10 meters was fun.

That CPVC tee lasted a good deal longer in the UV and wind than we ever imagined.  Granted, the antenna was stored in my folks’ garage for 7-8 years while I was in college and graduate school.  But, I reinstalled it when we moved to Maryland.  Last week brought high winds to the Mid-Atlantic region and the fitting gave up the ghost: 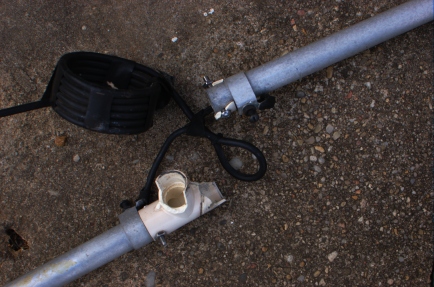 Fortunately, it takes all of a half-hour and another 33-cent fitting to replace it.  I did think of running a piece of pipe, dowel, or fiberglass across the element for extra strength.  But, I’ll do that if it fails again soon.  The process of repairing the antenna reminded me of the technique we used to tune it, which we thought was very clever at the time.

We used the “magic” 468 to set the initial length of the antenna optimized for 28.400 MHz, which was totally wrong since 468 is intended for bare wire, not tapered aluminum.  Then, we installed it and measured the VSWR across the band (in the shack).  Next, we took the frequency of the minimum VSWR and divided that by the design frequency.  Then, took the antenna down and scaled the length of the antenna by the quotient from the previous step.  Finally, we reinstalled the antenna and measured the VSWR across the band.  It hit dead-on.  Dad was impressed that my first two QSOs were KL7 and ZS!  It was, of course, ten meters when ten meters was good.

This may be old-hat to a lot of folks, but we thought we were geniuses at the time, although it was purely an act of shade-tree engineering!  For those who don’t mind watching sausage made, I will now muse on the validity of the technique.

Suppose you have a “magic factor,” M (=468 or whatever), that defines the frequency of minimum VSWR for an antenna of length l:

Rearranging that will be useful later:

If we take the partial derivative of each side in the first equation, and substitute M from the second equation we get the following relationship:

Cross-multiplying/-dividing and abusing the partial derivative notation to be a small perturbation yields:

This is subtly different from the original technique, which can be derived from this using some small-number approximations.  But, the point is that there exists a simple technique to prune a dipole to resonance.  delta-f is the offset between the design and actual VSWR minimum frequencies, f is the design VSWR minimum, l is the design length, delta-l is the amount that needs to be added (pruned).

One Response to “One-step dipole pruning”