One of those “Are you kidding me” mommets.

9 May 2020 | by Mike VE9KK  |  Share |  Tweet |  Leave a Comment (12)
Back in late April, I posted the inspection of two heat sinks my Icom 7610. I always get a bit anxious when I remove all the cable from the radio and all that is plugged into it. In the past, I have learned that it saves lots of time and headaches if I use my trusty iPhone and take pictures of the cabling. I really don't have all that many cables at the back of the radio BUT I still take pictures. Once the heat sinks checked out to be without issue it was time to re-connect the radio again along with my trusty pictures.
All was connected and it was time to fire up the radio and see what happened. Everything was good and now it was time to make sure all software was "talking" to the radio. There were no issues so far until I went into transmit. The antenna I am using is an EndFed multiband and I do need a tuner to allow a decent SWR. The odd thing was it seemed my tuner lost its memories of the presets for each band. That was no issue I just started back at square one and returned each band so it was in memory. The issue was after tuning the band I would attempt to transmit and the tuner would start tuning again as the SWR seemed to go back up over 3.0. The first thing I checked was that the antenna was still up and it was as you never know stuff happens. I double-checked the rear of the radio with my pictures and all was good there.
To me, it seemed something was up with either a coax patch cable or the coax out to the antenna. The first thing I wanted to check was the PL259 connectors on the back of the radio. I have in the past had these connectors show issues once they were moved around with being unconnected and re-connected. I try to keep coax angles very slight as I have found over time this can add stress to the connection. I was not looking forward to the whole process but it was the next step that had to be done. 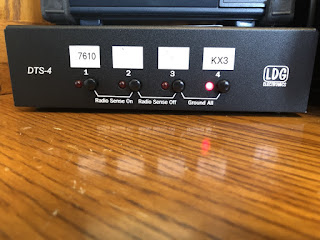 I am not sure why but out of the corner of my eye I noticed my LDG DTS-4 antenna switch which I use as a radio switch (between my Icom 7610 and Elecraft KX3) and not antenna switch as I only have one antenna at the moment. The light on the DST-4 position 1 for my 7610 was out and the light for the KX3 position 4 was on! Problem solved the DTS-4 was grounding out my 7610 as it was not selected and with the simple push of a button my problem was solved.
Mike Weir, VE9KK, is a regular contributor to AmateurRadio.com and writes from New Brunswick, Canada. Contact him at [email protected].

12 Responses to “One of those “Are you kidding me” mommets.”