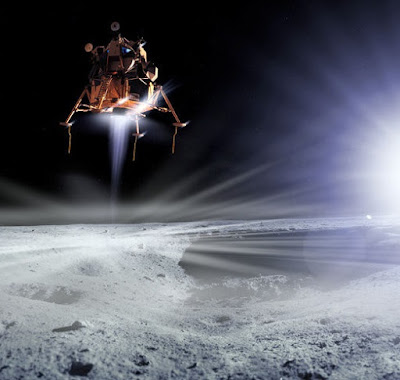 Here men from the planet Earth
First set foot upon the Moon
July 1969, A.D.
We came in peace for all mankind
Neil  A. Armstrong     Michael Collins     Edwin E. Aldrin Jr.
Astronaut                Astronaut                  Astronaut
Richard M. Nixon
President, United States of America
To read about the communications systems that the Lunar Module employed, here are two good links from the NASA Archives: https://ntrs.nasa.gov/archive/nasa/casi.ntrs.nasa.gov/19720023255.pdf and https://ntrs.nasa.gov/archive/nasa/casi.ntrs.nasa.gov/20090015392.pdf
The S-band transceiver was the primary transceiver used for TV, telemetry, biomedical data, and voice communications from the Lunar surface. It had an output power of  750 mW (QRPp!).  That signal then went to the S-band power amplifier, which boosted the signal to an outstanding "QRO" signal of 18.6 Watts.
72 de Larry W2LJ
QRP - When you care to send the very least
Larry Makoski, W2LJ, is a regular contributor to AmateurRadio.com and writes from New Jersey, USA. Contact him at [email protected].