The last couple of days I’ve been wasting way too much time tracking mobiles using the new Google Street View feature of aprs.fi, which since I wrote about it last is now live on the production server. I have been running a second instance of APRSIS32 linked to my K3 on 30m using the AGWPE soundcard modem. Surprisingly, I have found quite a few mobile stations beaconing their position on 30m and even more surprisingly they are often being picked up direct by my attic mounted MFJ magnetic loop. It’s fun to follow these mobiles and see what they are seeing as they drive along, but I get a bit of a thrill when I see my station displayed as the one that gated their position report to the internet. I suppose it’s a bit like reverse WSPR. 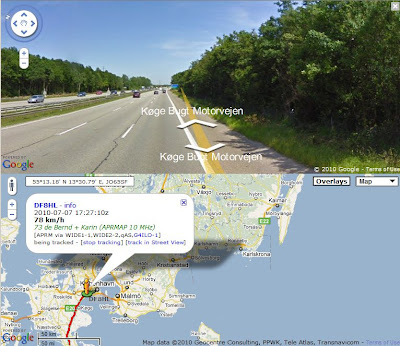 Yesterday and today I have been following Bernd DF8HL and his XYL Karin DF8HY who are touring Scandinavia an an old VW camper van festooned with antennas, as you can see from their website. It must be great to just tour in your mobile shack, going from one place to another, yet in touch with your friends by amateur radio. But Olga wouldn’t agree, so instead I must content myself to do it virtually with the help of APRS and Google Maps.